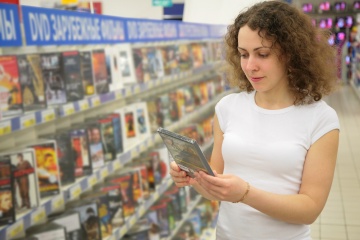 Video stores aren't on every corner anymore, but your trusty DVDs will be sticking around.
Pavel Losevsky/Hemera/Thinkstock

In June 2014, research firm PricewaterhouseCoopers LLC released a report estimating that by 2018, revenues from electronic home video services like streaming and video-on-demand will exceed revenues from all DVD and Blu-ray sales and rentals [source: PwC].

The report predicts that physical home video (i.e., DVDs and Blu-ray discs) will be the only segment of the filmed entertainment industry to experience a decline over the next four years, with revenues from movie theater tickets and electronic streaming services expected to grow [source: PwC].

If you consider how long it's been since you last walked into a Blockbuster or local video store, the decline in DVD revenues probably comes as no surprise. Even Redbox, which rents DVDs for a dollar a day at 40,000 self-service kiosks throughout the United States, plans to close 500 of its kiosks after a year of flat sales [source: Welch]. But does the downward trend in sales and rentals mean DVDs are becoming obsolete?

New technology continually replaces old, so it seems inevitable that DVDs will eventually go the way of the VHS tapes they replaced in our home libraries, but that day has not arrived just yet. According to the Museum of Obsolete Media, even the VHS format didn't truly become obsolete until the late 2000s, with the last major film released to VHS in 2006.

And unlike VHS — which trailed DVDs in terms of quality, storage capacity and ease of use — DVDs still hold several advantages over streaming and video-on-demand, including availability of titles, affordability (particularly if you watch the same movies over and over again) and the ability to access your movies even when no Wi-Fi connection is available [source: Hayes]. If you've ever taken a long flight or road trip with young children, you know that a portable DVD player is a beautiful thing.

Major studios, indie labels and smaller distributors still routinely release their movies and specialty content to DVD, and they still make plenty of money doing it [sources: Hayes, Melanson]. Collectors and cinephiles point to the quality and reliability of physical media over digital media, in addition to the ability to share favorite titles with friends [sources: Hayes, Lynch, Melanson].

"The real problem with streaming is simply that the consumer doesn't actually have any ownership over the movie," said Matt Lynch of Scarecrow Video in Seattle, Wash. In August 2014, the business launched a successful Kickstarter campaign to convert itself — and its 120,000-title movie collection — into a nonprofit organization.

"If you buy a digital copy of something, technically the rights holder (the studio) can suspend your license to use it at any time," Lynch said. "And on-demand streaming is great, but the selection is limited by rights deals negotiated by big corporations."