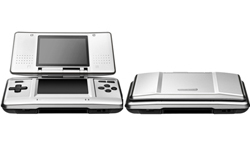 Nintendo has a long history with mobile gaming -- could the company make the move into smartphones?
Nintendo of America, Inc.

Could the company behind Mario, Link and Donkey Kong be working on a smartphone? It would make sense -- Nintendo's market includes casual gamers. These are people who often enjoy playing relatively simple, compelling games. They may only play for a few minutes at a time and aren't necessarily hardcore about getting every achievement and blasting every enemy in sight.

The smartphone market in general, and Apple in particular, has shown that there's a big market in casual games for phones. Some industry analysts have suggested that the shift of casual gaming to smartphones might hurt Nintendo if the company doesn't join in.

A Nintendo smartphone could give people access to some of the most beloved characters in video games on a new platform. And given that Nintendo CEO Satoru Iwata said that there are no plans to allow Nintendo titles to appear on smartphones like the iPhone or an Android phone, it might be the only way we'll ever put a call on hold to see if the Princess is in the castle.