What does solid-state mean in relation to electronics?

Browse the article What does solid-state mean in relation to electronics? 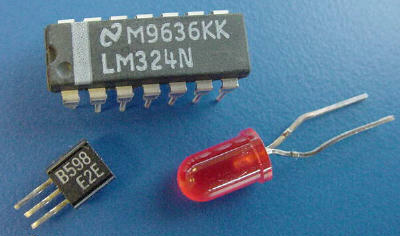 One of the first solid-state devices was a crystal radio. In a crystal radio, a piece of wire positioned on a crystal's surface is able to separate the lower-frequency audio from the higher-frequency transmitted radio carrier wave. This form of signal detection is due to the crystal's ability to pass a current in only one direction. For more details, see How Radio Works.

In the sandwich-like construction of a transistor, the emitter, base, and collector do a similar task at much lower DC voltages, with no "warm-up" time! In digital circuits, an integrated circuit chip is nothing more that a collection of transistors and wires that hook them together.

­ Solid state devices called diodes have a replaced rectifier vacuum tubes, used to transform alternating current (AC) to direct current (DC). Cool-running light-emitting diodes (LEDs), another solid-state device used for indicators on the front panel of your computer and monitor, have replaced the earlier incandescent bulbs. Multiple bright LEDs are also used for the third stoplight on many U.S. vehicles and for traffic signals.

Solid-state miniature electronic components are in many places:

See the links that follow for more information about solid-state electronics.