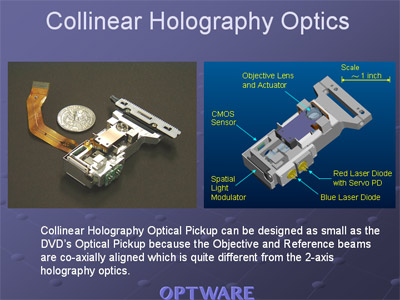 Holographic memory has been around for more than 40 years, but several characteristics made it difficult to implement in a consumer market. First off, most of these systems send the reference beam and the information beam into the recording medium on different axes. This requires highly complex optical systems to line them up at the exact point at which they need to intersect. Another drawback has to do with incompatibility with current storage media: Traditionally, holographic storage systems contained no servo data, because the beam carrying it could interfere with the holography process. Also, previous holographic memory discs have been notably thicker than CDs and DVDs.

Optware has implemented some changes in its HVD that could make it a better fit for the consumer market. In the HVD system, the laser beams travel in the same axis and strike the recording medium at the same angle, which Optware calls the collinear method. According to Optware, this method requires a less complex system of optics, enabling a smaller optical pickup that is more suited to consumer use.

HVD also includes servo data. The servo beam in the HVD system is at a wavelength that does not photosensitize the polymer recording medium. In the HVD test system, the servo data is carried in a red (650-nm wavelength) laser. The size and thickness of an HVD is also compatible with CDs and DVDs.

The structure of the disc places a thick recording layer between two substrates and incorporates a dichroic mirror that reflects the blue-green light carrying the holography data but allows the red light to pass through in order to gather servo information.

Because Optware's HVD system is currently in the late stages of research and development, complete technical information is unavailable for public consumption. But in the next section, we'll discuss a simplified version of the system that covers the major aspects of HVD.

Besides Optware, there are several other companies racing to get their consumer-friendly holographic storage system to market. One product in the running is Inphase Technologies' Tapestry(tm) disc, which could be on shelves as early as November 2006. See InPhase Technologies to learn more. 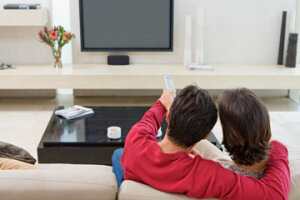