How To Recover Lost Data from Your Hard Drive 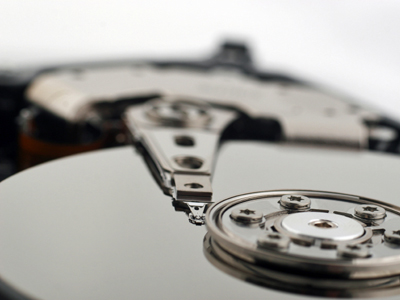 The read/write head floats just above the platter surface. A piece of dust or even a fingerprint can cause a head crash.
© iStockphoto.com/podgorsek

A hard drive is a mechanical device with several moving parts. Magnetic platters store the data itself, while a motorized spindle spins the platters. A read/write arm moves across the platters, retrieving information or putting down new data. The arm is moved by an actuator, and the read/write heads themselves hover an infinitesimal distance above the platters. The distance is so small that a single piece of dust can get in the way.

If any of the hard drive's mechanical parts fails, the whole drive will fail. The parts operate with incredible precision, so hard drives are rather fragile. Circuit boards, spindle motors, ball bearings -- any of these parts are susceptible to failure. The worst type of failure is known as a head crash. In this case, the read/write head drops down directly onto the platter and scrapes away the magnetic material. The data in that case is totally, permanently lost. Data on unaffected parts of the platters may be recoverable, but usually data are spread around the platters, so a head crash is really bad news.

Other mechanical failures can be both a curse and a blessing. It's a curse because it can be difficult and expensive to get replacement parts and find someone who can make the repair. It's a blessing because, as long as the platters weren't damaged, the data are still there. If you can get the drive running again, the data should be accessible.

The failure might be non-mechanical. Your computer uses a special index and file structure to read all the files stored on the disk. If this index becomes corrupted, the computer won't be able to see or read the data, even though it's still there. In many cases, this can be repaired with the proper software, although it can be tricky.

There's one last area where a drive can fail, and it's particularly insidious because the drive actually didn't fail at all -- the drive's connection to your computer failed. Hard drives connect to your computer's motherboard via a variety of interfaces, IDE, PATA and SATA being the most common. If this connection, or the circuit on the motherboard that controls the disk (called the disk controller) has failed, the symptoms can mimic the symptoms of a hard drive failure.

The next section will describe the warning signs of impending hard drive failure.