Browse the article How to Detect Online Scams 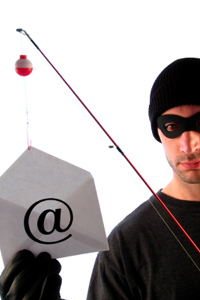 E-mail phishing scams are among the most prevalent examples of online fraud.
© iStockphoto/Double_Vision

"Hey buddy, come over here. Listen, keep this quiet. I've got a friend overseas who's trying to come here. He's filthy rich but he has to go through a lot of red tape on his side and ours. I was hoping you could help me out by spotting me a few thousand dollars so that we could grease the wheels a little. Don't worry -- once he's over here he'll repay your investment 100 times over. What do you say?"

If a random stranger approached you on the street and said something like that, you'd probably ignore him and keep walking. You might even report him to the local police. Who would trust someone they had never met with that much money? But an online scam very similar to the scenario above has fooled thousands of people into giving away millions of dollars to the scam artists. It seems that people who might be able to smell a rat in a real life encounter become more gullible while online.

That particular scam goes by names like the Nigerian scam or the 419 scam. There are hundreds of variations on the scam but they all have the goal of fooling you into giving away as much money as possible -- up to and including your bank account information. And there are thousands of other scams online. Some share similarities to the Nigerian scam and others are completely different. A few will even install harmful software called malware onto your computer and become a persistent problem.

The best way to deal with online scams is to avoid them entirely. After all, you don't want to have to repair damage later. We're going to give you some tips on how to recognize a scam so that you won't be a victim. The first thing you need to remember is that old saying, "if it sounds too good to be true, it probably is."

Most scams play upon basic human qualities that everyone has to some degree. Many of these qualities are not very flattering. They include traits like fear, vanity and greed. Con artists have leveraged these traits for hundreds of years -- play upon a person's greed and you can convince them up is down and cold is hot.

That also means that most online scams have a few clear indicators. If you receive a message or visit a site that says you are in danger unless you download a certain application, that's a red flag for a scam. The message is playing upon your fear. Of course, you don't want to have your computer overrun with viruses. But often these applications are masking a virus or other form of malware. Always view these messages with skepticism and caution. Research any application before you download and install it.

Most of us would like to think we're not vain creatures. But imagine you're on a social networking site and you receive a message containing a hyperlink that says something like, "You won't believe how great you look in this video!" Most of us would be tempted to follow the link and watch the video, particularly if we were worried it might be embarrassing. With so many people and organizations on social networking sites, you never know who could be watching.

Scam artists know that people are concerned with their online image. That's why they use messages like the one above to direct people to a bogus video site. In many cases, attempting to play the video prompts a pop-up window to appear. The window claims the user doesn't have the right video driver installed to view the video. It prompts the user to download a driver and then the video will (supposedly) play. However, the driver turns out to be malware in disguise.

Some malware can can do pretty nasty stuff if you install it on your computer. A keylogging application could keep track of every keystroke you make and send that information to a remote scam artist. The scam artist can then comb through your keystrokes and find out private information like user names and passwords to the sites you visit, including banking or shopping sites. Others might give root access of your machine to a remote cracker -- a malicious hacker. The cracker can then control your computer and you might never even notice.

Out of all the base human traits scam artists prey upon, greed may be the one they target most. These scams tend to follow the pattern of promising a huge payoff for a relatively small investment. It's the old "something for nothing" approach. Many scam artists use e-mail to spread the con around. This allows the con artist to send out hundreds of thousands -- or even millions -- of e-mail messages to potential victims. Even if the success rate is a fraction of that number, the payoff for the scam artist can be huge.

When you see an offer online, really take some time to think it through. A little critical thinking can often save you money and frustration. Don't rely on the links or testimonials attached to the offer itself. Search around elsewhere for independent verification that the offer is valid. Some may be genuine offers, while others may try to lure you into a pyramid scheme or pump-and-dump scam.

Some common indicators of scams include:

Scam artists will try to leverage anything to convince you to hand over money. Recently, some scam artists have even claimed to represent the United States government. The scam artists send messages to potential victims claiming to offer a portion of the economic stimulus package to help them out during the recession [source: Hruska].

Some potential victims have turned the tables on the scam artists. A Web site called 419 Eater urges people who have encountered scams to return the favor with scambaiting. The site defines scambaiting as luring scam artists into drawn-out correspondence in an effort to waste their time and resources. Some have gone so far as to convince the scam artists to travel halfway across the world or even carve a replica of a Commodore 64 computer out of wood! It turns out scam artists are just as vulnerable to greed as their victims.

Stay on alert, don't believe everything you read and always think before you click. To learn more about scams, take a look at the links on the next page.

Nice to a Fault