How to Avoid Spyware

The Effects of Spyware 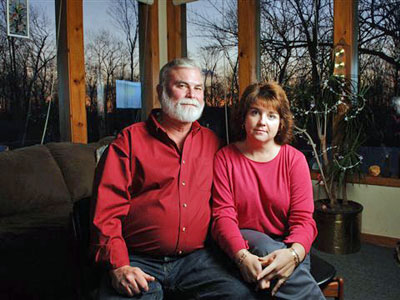 Julie Amero, right, and her husband Wes Volle sit in their living room Feb. 7, 2007. Spyware forced a computer to show pornography in the classroom where she was substitute teaching, costing Amero her job.
AP Photo/Fred Beckham

In its most benign form, spyware can gather data on your Web surfing habits and serve up ads for specific products or services. It can also turn your computer into a zombie system, sending spam e-mail messages to your contacts and far beyond. Your system can also be used to store data, such as e-mail lists, personal information or illegal images. Some spyware programs are designed to capture every keystroke and mouse click, allowing hackers to follow you around the Web in real time, as you log in to your bank account or other important sites.

Spyware cost one substitute teacher her job and almost put her in jail. In October 2004, 37-year old Julie Amero was substitute teaching in a seventh-grade class at Kelly Middle School in Norwich, Conn. Amero, who said she wasn't an experienced computer user, had finished checking her personal e-mail and left the room briefly to use the restroom. When she returned, some children were standing around the computer giggling at a series of semi-pornographic images that were popping up in various windows on the screen.

Amero said she didn't even know how to turn the machine off and tried unsuccessfully to get the images to stop. When she asked for assistance from the school's vice-principal, she was told not to be concerned about it. At the end of the day, angry parents began calling the school, having been informed of the incident by their children. Alarmed by the frantic calls, the school alerted police, who arrested Amero. Prosecutors charged her with several counts of risk of injury to a minor.

The prosecution relied on a witness who told jurors Amero had clearly clicked on the link that brought up the dangerous images. As a result, she was convicted on four counts and faced up to 40 years in prison. Alex Eckelberry, CEO of Sunbelt Software, heard about the case and set out to prove the incident was the result of spyware. With the assistance of other computer experts, Eckelberry convinced the judge overturn the conviction and order a new trial.

As prosecutors waffled on whether or not to retry her, Amero agreed to plead guilty to a single count of disorderly conduct in November 2008 to avoid further court time. At the time of this writing, Amero is no longer allowed to work as a teacher and had been unable to find other work [source: ABC News]

Spyware is against the law -- sort of. The federal government and many states have passed laws against installing software on a computer without the user's consent and using spyware to gather personal information, such as passwords. The problem is that many users actually consent to spyware being included when they download and install free utilities or games. As mentioned earlier, when you click on the Next button to install software, stating you have read and understand the end user license agreement, you're allowing spyware to go to work on your computer.