How to Build a Computer 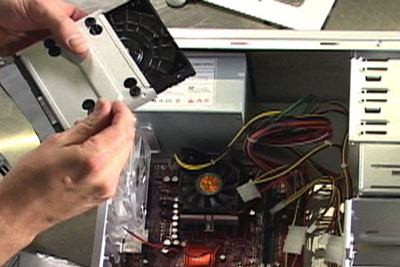 Placing the hard drive into its bracket.

The last steps are installing the hard drive -- or drives -- and the optical drive. The case has a removable bracket with four rubber grommets on it, which line up with four holes on the hard drive. It also should have come with four screws made just to punch through those grommets. Screw the hard drive into the bracket, then put the bracket back into its slot in the case. Then connect the hard disk to the power using one of the connectors coming off of the power supply. If it fits, then it's a match.

Now install the cables. One side of the cable has a red stripe on it, which makes it "pin 1." Look on the motherboard and hook the cable into the IDE connector marked "1." Insert the other end of the cable on the back of the drive. Now the drive is ready to go.

Install the optical drive next. Again, set the jumpers correctly. The drive fits in the front of the case, and you may have to pop out a faceplate to make room for it. Slide it in and screw it into place, making sure that it's aligned with the front of the case. Just as with the hard drive, you can use any available connector from the power supply. You'll also use the cable that came with the optical drive to connect it to the motherboard (align the red stripe for "pin 1") and plug the other end into the drive. Connect the audio for the optical drive. Again, there's an obvious place for it to plug in on the motherboard and on the drive itself.

If you're using a video card, now you'll install it as well. The motherboard only has one video-card slot, so you should be able to find it easily (you can also use the manual). Line up the card with the slot and push it into place. If the video card has its own power connector, connect it to the power supply. If the case has extra fans, make sure they have power too.

Now you can close up the case and add a monitor, keyboard, mouse and speakers. In the next section, we'll cover what to do after powering up the computer and what steps to follow if it doesn't work.