by Patrick J. Kiger Feb 13, 2018
Detail from a ceramic piece found at Tikal, the ancient Mayan city now known to have been part of a massive civilization recently discovered in the Guatemalan jungle. M and M, Inc/Corbis/Getty Images

By using a technology called LiDAR to peer through the dense tree canopy of the Guatemalan jungle from above, researchers have uncovered a massive network of ancient Mayan ruins, which have been hidden for centuries.

The discovery, first reported by National Geographic, promises to alter our understanding of the Maya civilization, by revealing that it was far bigger in scale and more advanced and complex than previously believed. Researchers located the ruins of more than 60,000 houses, palaces, highways and other manmade features, according to the publication. A press release by the University of Houston, home of the National Center for Airborne Laser Mapping (NCALM), describes the find as sprawling over an area of 811 square miles (2,100 square kilometers). To appreciate the size of the Maya megalopolis, consider this: It was 1.7 times bigger than the modern-day city of Los Angeles.

According to National Geographic, the discovery suggests that the Maya civilization, which peaked 1,200 years ago, was highly sophisticated. CNN reported that the findings include a 90-foot (27-meter) tall pyramid, as well as evidence of agriculture, quarries and fortifications, plus an extensive road system that connected settlements. According to CNN, researchers believe that 10 million people lived in the region, many times more than previous estimates.

Scientists study a projected LiDAR image from Tikal, the site of the recently-discovered Mayan civilization in Guatemala, as featured in the National Geographic documentary "Lost Treasures of the Maya Snake Kings." More information can be found here.
Photo Courtesy National Geographic/Wild Blue Media

"These findings are important because the data lay bare an entire civilization that has not been disrupted by modern development," says Thomas Garrison, a Maya archaeologist and assistant professor at Ithaca College who worked with other researchers on the PACUNAM LiDAR Initiative. PACUNAM is a Guatemalan nonprofit that focuses upon aiding scientific and archaeological research and efforts to preserve the Central American nation's cultural heritage.

"We don't just see the big sites," Garrison explains in an email. "Instead we're seeing all of the infrastructure that made the Maya civilization function. How they fed themselves, how they traveled, and how they defended themselves."

From the density of the settlement, "we now know that the ancient Maya were able to sustain a population in this region that was substantially greater than what exists in the present, and they did so for over 1,000 years," Garrison says.

Diane Davies, a British archaeologist and educator who specializes in the Maya, says the discovery of the extensive ruins could help challenge widely held assumptions about the Maya culture, such as the belief that challenges of living in the rainforest environment would have limited the population size.

"The Maya lived in this area for over 1,500 years in the millions," she writes in an email. "To live this long and at such high numbers suggests that they were not only highly efficient in their agricultural systems but also environmentally aware – that is they knew the limitations of the environment and sought to protect it."

The new findings add to existing evidence of the Maya civilization's advanced state, such as their writing system, mathematics and complex calendars. The Maya "had some of the largest temple-pyramids in the world, all built without metal tools, the wheel or pack animals," Davies says. "These are just a few of their achievements and why people need to re-evaluate the Maya."

The discovery also is another example of how LiDAR – which stands for Light Detection and Ranging – is rapidly revolutionizing archaeology. Instead of hacking through the jungle in search of ruins, researchers can fly over it in an aircraft equipped with a laser and other equipment. By firing hundreds of thousands of laser pulses each second, they can collect data and create a three-dimensional map of the ground surface and its features.

As this 2016 article from The Conversation by British archaeologist Mark Horton explains, LiDAR was first developed by NASA in the early 1970s as a tool for space exploration. The 1971 Apollo 15 mission used an early LiDAR instrument to map the moon's surface topography from orbit, and scientists subsequently used it to study Mars and detail the shape of an asteroid, according to this 2010 NASA document.

But archaeologists figured out how to adapt the technology to find ancient ruins in remote places. In the early 2010s, as detailed in this New Yorker article, researchers utilized LiDAR to locate la Ciudad Blanca, the "White City" in Honduras whose existence had been the subject of rumor and legend since the days of Hernán Cortés. More recently, others used LiDAR to scan the Cambodian jungle and uncover a 1,400-year-old city that would have rivaled Phnom Penh in size, according to this 2016 Guardian article.

NCALM director Ramesh L. Shrestha says that LiDAR technology has become vastly more powerful since he first began to use it in the late 1990s. In that time, devices have gone from shooting 3,000 pulses per second to 900,000 today. That results in much higher resolution maps, and has reduced the amount of time required to cover an area such as the Maya site.

"The advances made it possible to do a project of this scale," Shrestha says.

According to Shrestha, though, the Maya megalopolis may be dwarfed by even bigger future LiDAR projects. He said researchers eventually want to map areas that are nearly 5,800 square miles (15,000 kilometers) in size in Guatemala and Mexico.

Now That's Interesting
The Maya used a turquoise blue paint in ritual ceremonies and for painting pottery. It was durable and fade-resistant, retaining its bright blue color throughout the centuries. The color was named Maya Blue and scientists recently may have solved the mystery of how it was created, theorizing that the Maya used heat and resin from copal, the sacred incense, to fuse indigo extract and clay. 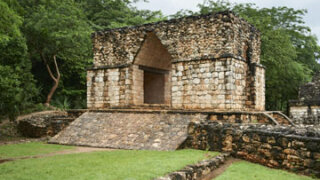 Did the Mayan civilization end because of climate change? 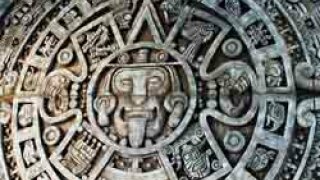 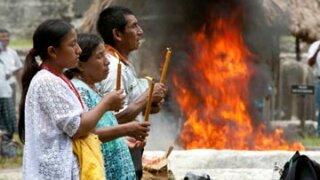