by Jacob Clifton
Prev NEXT
4 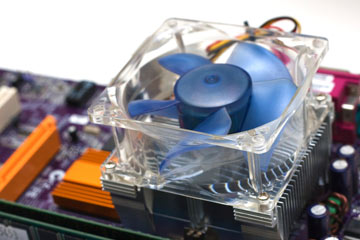 CPU cooling fans like this are a common sight -- computers actually expend more than half of their energy just trying to manage their temperature. Supercomputer engineers are always on the quest for better, more efficient ways to keep things running cooler.
©iStockphoto/Thinkstock

All that power comes at a cost. If you've ever had a failed heat sink crash your desktop computer, or sat with a laptop actually in your lap for more than a few minutes, you know what that cost is: Computers use a lot of heat-producing energy. In fact, one of the major challenges for supercomputer developers is finding a sensible way to install and use the mighty machines without hardware failures or increasing damage to the earth. After all, one of the main uses of weather simulations will be to monitor carbon and temperature fluctuations, so it wouldn't be very smart to add to the very problem climatologists are trying to solve!

Any computer system is only as useful as its worst day, so keeping those hot circuits cool is of major interest. In fact, more than half of the energy used by supercomputers goes directly to cooling. But since the future of supercomputing is tied up with other vanguard sciences and futurist agendas, ecological concerns are already a matter of grave importance to high-performance computer engineers [source: Jana]. Green solutions and energy efficiency are parts of every supercomputer project underway, and in fact, Sequoia's efficiency was a large secondary reason the IBM supercomputer debuted to such fanfare.

From cooling with "free air" -- that is, engineering ways to get outside air into the system -- to hardware designs that maximize surface area, scientists try to be as innovative with efficiency as they are with speed. One of the most interesting ideas several teams are using is to run the system in a conducting liquid that picks up the heat, then gets piped through the structure housing the computer banks themselves. Heating water and rooms while simultaneously cooling the equipment is an idea that has many applications beyond just supercomputer sites, but the projects on TOP500's list are taking ideas like these very seriously indeed.

Addressing ecological and efficiency concerns is not only a good idea for our planet, but necessary in order to make the machines run. It's perhaps not the most glamorous application this research can promise the rest of us -- and you were promised futuristic trends!