by Cherise Threewitt
Prev NEXT
3 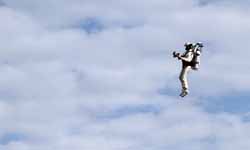 JetPack Man at the Texas Motor Speedway on Nov. 6, 2011 in Fort Worth, Texas.
Jerry Markland/Getty Images for NASCAR

Here's to all the kids who dreamed of flying.

And here's how it might happen. The U.S. Army began toying with jetpacks in the 1940s, and hired Bell Aerosystems in the 1960s to push along progress. The results were disappointing, though: Although Bell had made a lot of progress, they simply could not promise the fast, nimble, safe and distance-capable machines the military envisioned. After that, large-scale jetpack development basically ground to a halt. But a handful of hobbyists and investors held on to the dream, even if seems perpetually stuck in pre-launch mode.

Okay, technically, a jetpack can already get you off the ground, under the right circumstances. But today's jetpacks can't support a person in flight for more than a few seconds (and if you weigh more than 175 pounds (79.4 kilograms), you're out of luck). A handful of companies have worked on jetpacks, and have achieved similar results, but New Zealand-based Martin Aircraft seems to be the most likely to achieve commercial success. Martin was formed in 2004, specifically to complete and market an existing jetpack prototype.

Martin describes their jetpack as both "aviation" and a "recreational vehicle." Two concepts at odds with each other? Well, perhaps. After all, a Fortune 500 CEO commuting by private helicopter fulfills both criteria. However, they also think it's "practical," and that's a bit harder to swallow. Practical for whom or what, exactly (at a projected price of $100,000)? Millionaires? Billionaires? The environment? But, more important, for every kid who fantasized of owning a jetpack one day (whether inspired by comic books, video games or LEGO sets) does practicality factor in at all?

No fear -- gasoline-operated mass-market jetpack use will be safe and easy, according to Martin, with automated hover, stability in "reasonable weather," and a parachute. Pilots will be trained by simulators, and, once in flight, will be supported by automated and computerized controls that will determine and maintain a safe height. Martin also anticipates that pilots will undergo some kind of licensing requirement.

Martin hopes to complete a flight by the end of 2012, begin delivering to corporate and government customers in 2013, and get jetpacks on the backs of private citizens in 2014. They're currently restricted from use in populated areas, which, for now, is just another roadblock on the path to commuter use. Despite claims of growing interest by actual groups who will actually use these (like government defense programs, law enforcement teams, and rescue services), it seems like Martin's mostly making them because they can. Which is fine, of course. Jetpacks exist, and we've achieved a flight-of-fancy milestone. Maybe someday you'll actually get to touch one.