by Cherise Threewitt
Prev NEXT
9 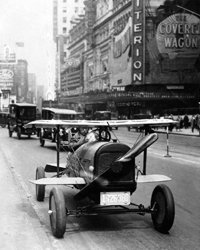 A car with wings and a propeller protruding from the radiator grille drives through Times Square, New York. The invention of A.H. Russell of Nutley, New Jersey.
Hulton Archive/Getty Images

Maybe it's not as versatile as the flying car, but it's way cooler looking. It was considered "futuristic" in the 1920s because it fit the vibe of the time. Airplanes were revolutionizing travel, so why not make a car that shared a little of the technology and a lot of the style?

The prop-driven car was land-bound despite its aviation-inspired silhouette. The most popular and well-known propeller car, the Helica, was designed by an actual airplane designer -- perhaps no surprise there. Another non-shocker? This glamorous contraption was of French origin. Engineer Marcel Leyat made considerable advancements over previous iterations -- his prop-driven car was designed from the ground up (most others simply consisted of a car with a propeller stuck to the front), an approach that allowed him to incorporate aerodynamic styling and efficiency-improving techniques that contributed heavily to the car's future-forward appeal.

It worked like this: The car's motor turned the propeller and the propeller thrust the vehicle forward. It lacked a transmission to help control power, steering and even brakes. Also conspicuously missing from most versions? A way to protect pedestrians, onlookers, and other innocent victims from the propeller's rapidly spinning blades. Again, a vehicle that seemed destined for mass-market success suffered an untimely demise.

Seems like one of the characteristics of futuristic vehicles is that people just don't give up on them, even though it's easy to see the countless reasons why a modern version of this car wouldn't work. Half a century (and more) later, though, hobbyists are still working on propeller cars to use as land speeders. There's a thrill to it, they've said. Find an open, flat area and let it go -- relatively uncontrolled. There may not be any transit-altering revolutions from these kinds of DIY garage projects...but the human desire to experience speed cannot be denied.