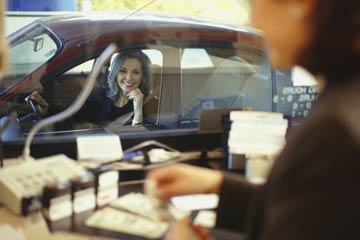 You can still see pneumatic tubes in action at your bank drive-up window.
Ryan McVay/Photodisc/Getty Images

For someone who was born after, say 1992, it's probably difficult to imagine, but there was a time when people didn't have e-mail, cell phones or digital books on Kindle. Back in the late 1800s, people mainly communicated long distance by letter or telegram. Even telephones were still a novelty.

Our ancestors' lack of instantaneous communication may make the world of a century or more ago sound hopelessly slow-moving. But it didn't seem that way to them. One reason was that they did have a means of transmitting written and printed information — and other objects as well — in what seemed like a flash. In a sense, it was their version of the Internet, but it wasn't electronic. Instead, they had something called pneumatic tube transport — a bunch of pipelines in which air pressure is used to propel a canister through a system of tubes to its intended destination [source: Library – UC Berkeley].

Starting in the mid-to-late 19thcentury, numerous major cities in the U.S. and other countries built massive underground networks of pneumatic tubes, and relied as heavily upon them as we do upon e-mail today. Pneumatic tube systems worked so well, in fact, New York City's post office used one to move mail around the city until 1953, and Berlin had a similar system up and running until 1976 [source: Web Urbanist].

And while pneumatic tube transport has largely been supplanted by quicker and more convenient electronic methods of transmitting information, the technology still has valuable uses. In this article, we'll talk about how pneumatic tubes work, what they were once used for, and what they are used for today.

The metal-and-glass intricacy of pneumatic tube systems seems like a perfect example of Victorian-era technology, the sort of elaborate period gadgetry that you might see Robert Downey Jr. tinkering with in one of the recent Sherlock Holmes movies. But actually, the idea of pneumatics — that is, using pressurized gas to produce mechanical motion — goes back to Hero of Alexandria, a Ptolemaic Greek mathematician, inventor and author who lived in the first century A.D. [sources:Merriam-Webster, Britannica].

Hero apparently was a pretty observant guy. He noticed that the wind, even though it didn't have a visible substance, could push pretty hard on things. That led him to deduce that air was actually composed of tiny, invisible, moving "particles," what today we call molecules. He went on to figure out that if you compressed those moving molecules by jamming them into a tight space or passageway, they'd try to escape, and in the process, push a solid object that was in front of them. He also deduced that if you could create a vacuum — basically, an empty space — that air molecules would try to rush into it. By means of these principles, he wrote, "many curious and astonishing kinds of motion may be discovered" [source: Woodcroft].

Hero used his understanding of how pressurized gases behave to create gadgets like a primitive steam engine and a singing toy bird, but it wasn't until the 1810 that a British engineer, George Medhurst, published a plan for a pneumatic tube transport system[source: Woodcroft].

Medhurst noted that if air was subjected to 40 pounds per square inch of pressure — only about two-and-a-half times the amount that the atmosphere exerts on us at sea level — air molecules would be propelled at 1,500 feet (457 meters) per second, or about 1,000 miles (1,609 kilometers) an hour. When pushing a canister, the speed would only be about 100 miles (160 kilometers) an hour, but that was blazingly fast for 1810 [source: Medhurst].

Unfortunately, Medhurst wasn't as good at actually building machinery as he was at designing it, and he died in 1827, before he actually could construct his vision [source: Stephen and Lee]. 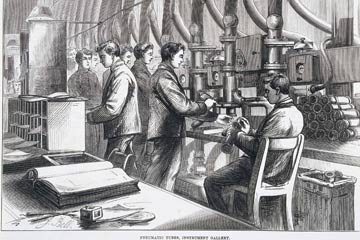 Pneumatic tube transport never died out completely. As long as people used paper documents and photographs, it was still a practical method of transmitting information inside large buildings. The U.S. Central Intelligence Agency (CIA), for example, built a sprawling pneumatic tube system inside its headquarters in Langley, Va., in the 1950s, which transmitted 7,500 documents each day throughout the building's seven floors. It wasn't shut down until 1989, when CIA employees had become so reliant upon e-mail that the tubes were no longer needed [source: CIA].

In the 1970s, companies also began to use heavier, more powerful pneumatic tube systems to transport materials such as machine parts and even gravel inside plants [source: New Scientist]. They're still widely used in industry for such purposes [source: Air Link International]. And banks still have pneumatic tube systems at their drive-up windows, which enable customers to make cash deposits or withdrawals from the comfort of their cars [source: Farber].

More recently, pneumatic tube systems have become popular in hospitals because they can be used to rush tissue and blood specimens from a lab in a distant part of the complex, far faster than a person could do on foot. Stanford University's hospital, for example, has installed a system with 4 miles (6.4 kilometers) of tubes, and uses it to ship 7,000 specimens each day. They've even wedded the 19th-century wonder to 21st-century technology, by equipping the tubes with a digital monitoring system that allows hospital staff to watch the progress of their canister to its destination on a computer screen [source: Wykes].

Back when I became a newspaper reporter in the mid-1980s, my then-employer, the Pittsburgh Press, actually still had a pneumatic tube system, which it used to transmit photos from the wire services printers to the sports department. I was in the features department, but my desk was right next to the pneumatic tube portal. Every so often — usually, as I was in the middle of an important phone interview or trying to compose a pithy lead — I would hear this loud, rocket-ship-like swoosh, followed by the thud of the glass and metal canister arriving. It was a bit jarring, and at the time, I found it annoying. But today, I have to admit that I'm a little nostalgic about that sound, because pneumatic tubes pretty much have vanished, and sadly, so has the Pittsburgh Press.