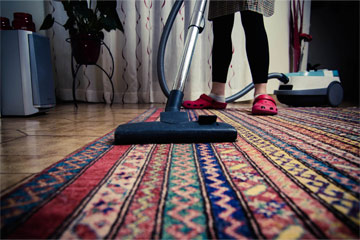 Many modern vacuums suck even more thanks to the process of cyclonic separation.
iStockphoto/Thinkstock

The box sat on the rug in my library, amid the hardcovers, paperbacks and copies of The New York Times. The package was tall, much taller than I expected. Yet there it was, greeting me after a long day at work. The house was quiet. A cat trotted into the room and rubbed her furry cheeks against the crate. The dogs followed and sniffed wet sniffs.

With scissors carefully in hand, I clipped the packing tape. One snip. Two snips. Three, and then four. The tape fell to the carpet in a sticky tangle, much to the cat's delight. Plastic and cardboard sleeves shrouded the contents, which I gingerly lifted from the box. I ripped the plastic off and threw the sleeves helter-skelter. Oh my, wasn't it beautiful! My new Dyson vacuum cleaner was beautiful! I quickly assembled the machine, my hands shaking like a fumbling lover. The hose goes here, the nozzle there. I plugged it in. I fired it up.

The Dyson roared to life. I was smitten. I have had affairs with other vacuums cleaners before. Eventually, they lost their ability to satisfy. Off they went, in a cloud of dust to the garage, to the town dump, to the attic. I hoped the Dyson would be different. I was sure it would be. I had done my homework. Cyclonic separation! That was the ticket. None of the other vacuums I ever owned had such technology.

Power of the Cyclone 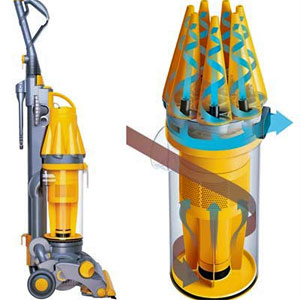 Let's start with the basics. Cyclonic separation can eliminate particulates, such as dirt and dust, from a stream of air, gas or liquid. Engineers sometimes call these tornadic dust busters centrifugal separators. That's because at the root of these machines is something called centrifugal force [source: University of Delaware].

Think back to your high school physics class. Centrifugal force is the tendency of an object following a curved path to fly away from the center of the curvature. Remember the ball and string experiment? Sure you do. You swung a ball on a string over your head. What happened when you released the string? The ball flew off on a path that was tangential to its radius at the point of release. That's centrifugal force, which is not to be confused with centripetal force, the moving of an object toward a center or axis (or what compels the ball to keeping moving in a circle over your head until you release it).

Yet, centrifugal force is not a real force, but a form of inertia, the tendency of an object to move in a straight line until another force acts upon it. In a cyclonic separator, typically air laden with dirt and dust is pumped through the top of a vertical cylinder with a conical bottom. The fast-moving air enters the chamber at the top of the cylinder and begins rotating violently. As that happens, a mini tornado or cyclone forms [source: Wacharawichanant].

The air and dust spin wildly in a circular, spiraling motion. Because the particulates have more mass than air molecules, a greater force is needed to keep the debris moving in a circle. But there is no such force inside the cyclonic chamber. As the whirling mass of air spins, the heavier particles start to diverge and move toward the wall of the chamber. Because these large, dense particulates have too much inertia to follow the curvature of the air, they're thrown against the sides. Smack, the particles slam into the wall, sliding to the bottom of a dust trap or bin [sources: Wacharawichanant, University of Delaware].

Finally, the "clean air" near the bottom of the cyclone changes direction and moves up the center of the cylinder to an exhaust tube or outlet, which is usually connected to a filter that catches any remaining fine particles [source: University of Delaware].

Grease Be Gone: Other Uses for Cyclonic Separation

All of this sounds complicated, but cyclonic separators are so simple that a handy person can make one at home. Many industries use them to remove pollutants from the air, gas and water. The devices come in all shapes and sizes. Here's a sample.

So, back to my cyclonic vacuum cleaner. It was amazing. The Dyson sucked up the dirt, the dust mites, the dog hair and the dried cat vomit like nothing I had ever seen before. I watched amazed as the gods of physics ripped the debris outward from the spinning vortex, forcing the dirty mélange to the bottom of the cylinder. No fuss, no muss, no bags, no dirt. Cyclonic separation rules!

Please don't think I'm weird, but I'm one of these guys that enjoys vacuuming. I do it once a day, maybe twice in the winter. I have to. The cats and dogs, not to mention the woodstove, leave dust, hair and dander all over the place. Plus, it gives me time to fashion my articles and books in my head. As for cleaning, cyclonic technology seems to get the job done. Plus, I love to see the dirt spin in the cylinder.

7 Ways to Get Rid of Unwanted DVDs
Top 5 Car Gadgets
Will Guitar Hero really make me a better guitar player?