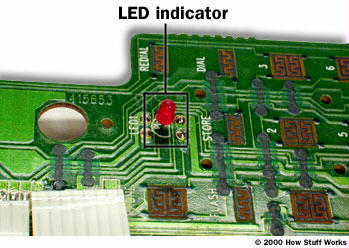 LED indicator light on the handset of the GE cordless phone
HowStuffWorks.com

The radio components of the handset are like those of the base -- they convert electrical signals from the microphone into FM radio signals and broadcast them at the same frequency as the receiving crystal of the base unit. The radio components also receive radio signals at the same frequency as the broadcasting crystal from the base, convert them to electrical signals and send them to the speaker and/or buzzer (ringer).

Remember that the base and handset operate on a duplex frequency pair that allows you to talk and listen at the same time.

Most handsets have one or more light-emitting diodes (LED) that indicate various things, such as when the phone has an open line or when the battery is low.

Some handsets have an LCD that can display numbers for caller ID features, similar to a cell phone. The LCD may be reflective or backlit so that you can see it when the room light is low.

The handset's battery supplies the power for all of the electrical components in the handset. All cordless phone handsets have a rechargeable battery (nickel-cadmium, nickel-metal hydride or lithium). When the battery runs low, an indicator light on the handset usually lights up or flashes. In some phones, a "beeping" sound may also indicate a low battery. You then recharge the battery on the base of the cordless phone.

The GE cordless phone that we dissected was from 1993. Modern cordless phones have the same functions and much of the same hardware. However, many of the electronic circuits that were once achieved with transistors, resistors and capacitors have been replaced with integrated circuits. This advancement allows the handset to be either smaller with the same functions or the same size with more functions.

In summary, a cordless phone is basically a combination of a telephone and an FM radio transmitter/receiver. Because it is a radio transmitter, it broadcasts signals over the open airways rather than specifically between the base and handset.

Because of this open broadcast, It is possible for other people to listen to your phone conversation by using a radio scanner. So an important issue and feature to look for in a cordless phone is security -- DSS offers the best protection against eavesdropping.