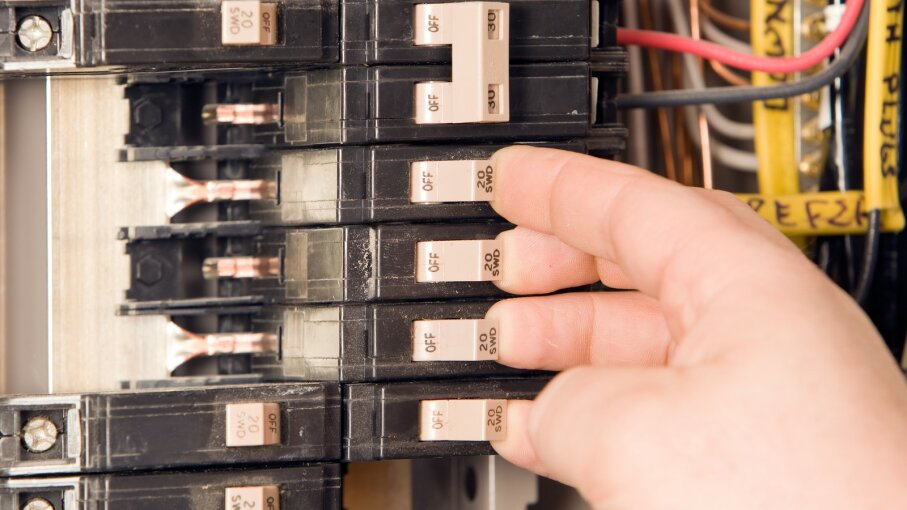 The circuit breaker is an absolutely essential device in the modern world, and one of the most important safety mechanisms in your home. Whenever electrical wiring in a building has too much current flowing through it, these simple machines cut the power until somebody can fix the problem. Without circuit breakers (or the alternative, fuses), household electricity would be impractical because of the potential for fires and other mayhem resulting from simple wiring problems and equipment failures.

In this article, we'll find out how circuit breakers and fuses monitor electrical current and how they cut off the power when current levels get too high. As we'll see, the circuit breaker is an incredibly simple solution to a potentially deadly problem.

To understand circuit breakers, it helps to know how household electricity works.

Voltage is the "pressure" that makes an electric charge move. Current is the charge's "flow" -- the rate at which the charge moves through the conductor, measured at any particular point. The conductor offers a certain amount of resistance to this flow, which varies depending on the conductor's composition and size.

So how does all of this come together in your home? Let's find out.

Circuit Breaker: At Work in Your Home

The power distribution grid delivers electricity from a power plant to your house. Inside your house, the electric charge moves in a large circuit, which is composed of many smaller circuits. One end of the circuit, the hot wire, leads to the power plant. The other end, called the neutral wire, leads to ground. Because the hot wire connects to a high energy source, and the neutral wire connects to an electrically neutral source (the earth), there is a voltage across the circuit -- charge moves whenever the circuit is closed. The current is said to be alternating current, because it rapidly changes direction. (See How Power Distribution Grids Work for more information.)

The power distribution grid delivers electricity at a consistent voltage (120 and 240 volts in the United States), but resistance (and therefore current) varies in a house. All of the different light bulbs and electrical appliances offer a certain amount of resistance, also described as the load. This resistance is what makes the appliance work. A light bulb, for example, has a filament inside that is very resistant to flowing charge. The charge has to work hard to move along, which heats up the filament, causing it to glow.

In building wiring, the hot wire and the neutral wire never touch directly. The charge running through the circuit always passes through an appliance, which acts as a resistor. In this way, the electrical resistance in appliances limits how much charge can flow through a circuit (with a constant voltage and a constant resistance, the current must also be constant). Appliances are designed to keep current at a relatively low level for safety purposes. Too much charge flowing through a circuit at a particular time would heat the appliance's wires and the building's wiring to unsafe levels, possibly causing a fire.

This keeps the electrical system running smoothly most of the time. But occasionally, something will connect the hot wire directly to the neutral wire or something else leading to ground. For example, a fan motor might overheat and melt, fusing the hot and neutral wires together. Or someone might drive a nail into the wall, accidentally puncturing one of the power lines. When the hot wire is connected directly to ground, there is minimal resistance in the circuit, so the voltage pushes a huge amount of charge through the wire. If this continues, the wires can overheat and start a fire.

The circuit breaker's job is to cut off the circuit whenever the current jumps above a safe level. In the following sections, we'll find out how it does this.

The simplest circuit protection device is the fuse. A fuse is just a thin wire, enclosed in a casing, that plugs into the circuit. When a circuit is closed, all charge flows through the fuse wire -- the fuse experiences the same current as any other point along the circuit. The fuse is designed to disintegrate when it heats up above a certain level -- if the current climbs too high, it burns up the wire. Destroying the fuse opens the circuit before the excess current can damage the building wiring.

The problem with fuses is they only work once. Every time you blow a fuse, you have to replace it with a new one. A circuit breaker does the same thing as a fuse -- it opens a circuit as soon as current climbs to unsafe levels -- but you can use it over and over again.

The basic circuit breaker consists of a simple switch, connected to either a bimetallic strip or an electromagnet. The diagram below shows a typical electromagnet design.

The hot wire in the circuit connects to the two ends of the switch. When the switch is flipped to the on position, electricity can flow from the bottom terminal, through the electromagnet, up to the moving contact, across to the stationary contact and out to the upper terminal.

Click on the circuit breaker to release the switch.

A bimetallic strip design works on the same principle, except that instead of energizing an electromagnet, the high current bends a thin strip to move the linkage. Some circuit breakers use an explosive charge to throw the switch. When current rises above a certain level, it ignites explosive material, which drives a piston to open the switch.

More advanced circuit breakers use electronic components (semiconductor devices) to monitor current levels rather than simple electrical devices. These elements are a lot more precise, and they shut down the circuit more quickly, but they are also a lot more expensive. For this reason, most houses still use conventional electric circuit breakers.

One of the newer circuit breaker devices is the ground fault circuit interrupter, or GFCI. These sophisticated breakers are designed to protect people from electrical shock, rather than prevent damage to a building's wiring. The GFCI constantly monitors the current in a circuit's neutral wire and hot wire. When everything is working correctly, the current in both wires should be exactly the same. As soon as the hot wire connects directly to ground (if somebody accidentally touches the hot wire, for example), the current level surges in the hot wire, but not in the neutral wire. The GFCI breaks the circuit as soon as this happens, preventing electrocution. Since it doesn't have to wait for current to climb to unsafe levels, the GFCI reacts much more quickly than a conventional breaker.

All the wiring in a house runs through a central circuit breaker panel (or fuse box panel), usually in the basement or a closet. A typical central panel includes about a dozen circuit breaker switches leading to various circuits in the house. One circuit might include all of the outlets in the living room, and another might include all of the downstairs lighting. Larger appliances, such as a central air conditioning system or a refrigerator, are typically on their own circuit.

For more information about circuit breakers and other electrical systems, check out the links on the next page.