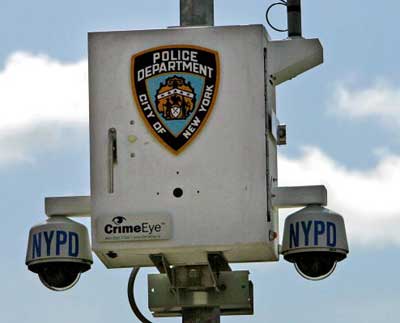 Do you ever get the feeling you're being watched? Walking down the street, do you sense that someone somewhere is keeping an eye on you? These days, chances are, you're right.

A growing number of cities across the United States and abroad have installed networks of closed-circuit television (CCTV) cameras. Police monitor the video in an effort to prevent crime and catch lawbreakers in the act. You've probably seen the cameras; they're intentionally made conspicuous. Signs let you know your actions are being recorded.

This law enforcement trend started in the United Kingdom in 1986 with three cameras in a 1-square-mile area in a town called King's Lynn [source: Nieto]. Today, England has more CCTV cameras than any country in the world, with half a million making up its network, nicknamed the "Ring of Steel" [source: Nieto]. Many U.S. cities, including New York, Philadelphia and Chicago, followed suit and began installing the police surveillance cameras in the early 1990s. Even the Jewish Holy Land in Jerusalem is wired with CCTV systems [source: National Institute of Justice].

These systems transmit live signals to television monitors at police stations. The cameras are similar to the ones commonly found in convenience stores and banks, which police and security departments have used for decades to solve crimes. CCTV systems sales jumped by almost 700 percent from 1980 to 2000 [source: National Institute of Justice]. As you can imagine, crime cameras don't come cheap. In fact, Great Britain's Ring of Steel cost more than $330 million from 1999 to 2001 [source: Welsh and Farrington].

­With all the money being pumped into these mechanized eyes, you might wonder how well they curb crime. That depends on who you ask. Law enforcement officials generally support them, citing significant drops in violent crime. On the other hand, comprehensive studies by the American and British governments have shown otherwise.

Why do these reports of effectiveness vary so much, and who's right? Read on to find out the answers, along with why some Americans feel the cameras violate the Constitution.

Not all police departments continuously monitor their CCTV video, but some do.
VEER Brian Donnally/Getty Images

Measuring how well police surveillance cameras prevent crime is a tricky process since you're dealing with a vague set of variables. You can't be entirely sure if someone planning to commit a crime decided against it because of a police camera. Additional factors, such as the season, economy or other law enforcement tactics can also have influence.

For example, a study of different CCTV effectiveness evaluations from various jurisdictions in Europe and North America by the Home Office Research Group in the United Kingdom eliminated 24 evaluations from its research pool because of faulty methods [source: Welsh and Farrington]. Of the remaining 22 that the Home Office examined, success rates bounced all over the place, depending on the setting [source: Welsh and Farrington]. You can see how the reports on the subject range broadly.

Law enforcement officials are usually the most positive about the crime cameras. Some of the recent statistics provided by U.S. police departments claim the following drops in crime rates:

On the flip side, of the 73 cameras installed in Washington, D.C. since 2006, none have provided footage that has helped solve any crimes [source: Washington Post]. Also, the New York Police Department reported a 30 percent drop in crime in a tough neighborhood in the Bronx after camera installation [source: Lee]. However, the camera installations coincided with increased police patrols.

So taken as a whole, what do all these numbers mean? The Home Office Research Group conducted another more comprehensive study in 2005, confirming that CCTV networks appear nearly ineffective [source: Gill]. A similar evaluation from 2006 by the U.S. Department of Justice, also questioned the reported success of CCTV systems, finding little evidence that they significantly reduce crime [source: Ratcliffe].

This isn't to say that crime cameras are entirely useless. Evidence consistently points out that cameras reduce auto-related crimes as much as 41 percent [source: Welsh and Farrington]. They are also more helpful with reducing crime in enclosed areas with less foot traffic when combined with other law enforcement efforts. And they're helpful in conducting post-crime investigations [source: Ratcliffe].

This goes against the presumption that this kind of preventative measure would save governments money. To make cameras worthwhile, police must manage and use their CCTV networks more proactively, rather than handling them as self-contained tools [source: Gill].

The cost and questionable usefulness of CCTV add more fuel to fire for privacy advocates who believe they are borderline "Big Brother," and invade people's right to privacy.

To fully understand this argument, let's first look at how the police use the camera and the footage. Most police departments designate personnel to watch the footage live, and some departments watch footage as potential evidence after crimes are reported. Skeptics worry that police act more like peeping toms, homing in on women and minorities rather than criminals. For that reason, certain cameras come equipped with special features that black out when focused above the second story of a building, for instance.

Although a few instances of misuse of surveillance footage have taken place, it appears that most police view the video responsibly. If they see a crime in action on camera, they can dispatch officers to the scene. Or if a crime is reported, they review footage for evidence.

Nevertheless, the American Civil Liberties Union (ACLU) fiercely opposes police camera surveillance, citing ineffectiveness and the chance for abusing the personal information recorded. In short, the organization views it as an unnecessary intrusion into private lives based on the Fourth Amendment that protects against unlawful search and seizure.

While the ACLU and other activists remain vocal about the issue, there are legal precedents in the United States establishing the legality of this kind of public surveillance. Since the cameras are clearly marked in public areas, courts have traditionally ruled that people understand that they are in open places where privacy shouldn't be expected [source: National Institute of Justice].

Interestingly, new CCTV technology that can "recognize" faces could alleviate privacy concerns in the United States. These systems match people's faces with mug shots of repeated offenders. This could reduce the possibility of officer bias. The system chooses which faces to focus in on rather than the operator.

Despite the mixed bag of results crime cameras carry, it looks like they're another permanent fixture in today's electronic world. For more information, click on to the next page.

United States v. Knotts (1983): People on public roads are subject to surveillance because they are in a public area.

7 Animals You Should Never Take Selfies With
How to Know What F-Stop to Use
How should a digital camera be cleaned?