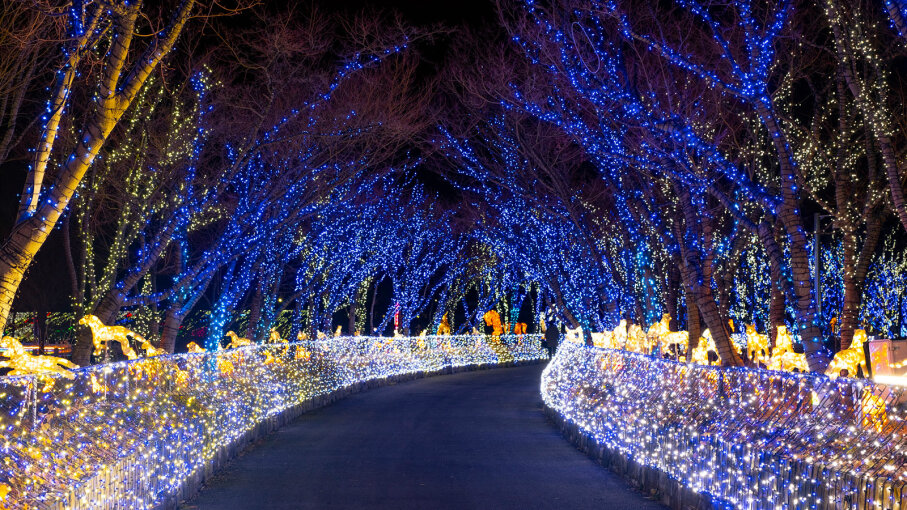 Light emitting diodes, commonly called LEDs, are real unsung heroes in the electronics world. They do many different jobs in all kinds of devices. They form numbers on digital clocks, transmit information from remote controls, light up watches and tell you when your appliances are turned on. Collected together, they can form images on a jumbo television screen or illuminate a traffic light.

Basically, LEDs are just tiny light bulbs that fit easily into an electrical circuit. But unlike incandescent bulbs, they don't have filaments that burn out, they use less electricity, and they don't get especially hot. They're illuminated solely by the movement of electrons in a semiconductor material, and they last just as long as a standard transistor. The life span of an LED surpasses the short life of an incandescent bulb by thousands of hours. Because of these advantages, tiny LEDs are one of the most popular technologies used to light LCD TVs.

LEDs have several advantages over conventional incandescent lamps, but their main advantage is efficiency. In incandescent bulbs, the light-production process involves generating a lot of heat (the filament must be warmed to illuminate). This energy is completely wasted unless you're using the lamp as a heater, because a huge portion of the available electricity isn't going toward producing visible light. LEDs generate very little heat, relatively speaking. A much higher percentage of the electrical energy is going directly to generating light, which cuts down the electricity demands considerably.

Until recently, LEDs were too expensive to use for most lighting applications because they're built around advanced semiconductor material. The price of semiconductor devices plummeted after the year 2000, however, making LEDs a more cost-effective lighting option for a wide range of situations. While they may be more expensive than incandescent lights up front (about $5 versus $1 for incandescent bulbs), their lower cost in the long run can make them a better buy. Several companies have begun selling LED light bulbs designed to compete with incandescent and compact fluorescents that promise to deliver long lives of bright light and amazing energy efficiency.

In this article, we'll examine the technology behind these ubiquitous blinkers, illuminating some cool principles of electricity and light in the process.

What Is a Diode? 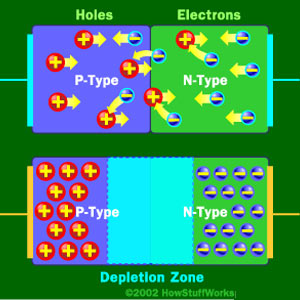 At the junction, free electrons from the N-type material fill holes from the P-type material. This creates an insulating layer in the middle of the diode called the depletion zone.
© HowStuffWorks

A diode is the simplest sort of semiconductor device. Broadly speaking, a semiconductor is a material with a varying ability to conduct electrical current. Most semiconductors are made of a poor conductor that has had impurities (atoms of another material) added to it. The process of adding impurities is called doping.

In the case of LEDs, the conductor material is typically aluminum-gallium-arsenide (AlGaAs). In pure aluminum-gallium-arsenide, all of the atoms bond perfectly with their neighbors, leaving no free electrons (negatively charged particles) to conduct electric current. In doped material, additional atoms change the balance, either adding free electrons or creating holes where electrons can go. Either of these alterations make the material more conductive.

To get rid of the depletion zone, you have to get electrons moving from the N-type area to the P-type area and holes moving in the reverse direction. To do this, you connect the N-type side of the diode to the negative end of a circuit and the P-type side to the positive end. The free electrons in the N-type material are repelled by the negative electrode and drawn to the positive electrode. The holes in the P-type material move the other way. When the voltage difference between the electrodes is high enough, the electrons in the depletion zone are boosted out of their holes and begin moving freely again. The depletion zone disappears, and charge moves across the diode.

The interaction between electrons and holes in this setup has an interesting side effect – it generates light!

How Can a Diode Produce Light?

Light is a form of energy that can be released by an atom. It's made up of many small particle-like packets that have energy and momentum but no mass. These particles, called photons, are the most basic units of light.

As we saw earlier, free electrons moving across a diode can fall into empty holes from the P-type layer. This involves a drop from the conduction band to a lower orbital, so the electrons release energy in the form of photons. This happens in any diode, but you can only see the photons when the diode is composed of certain material. The atoms in a standard silicon diode, for example, are arranged in such a way that the electron drops a relatively short distance. As a result, the photon's frequency is so low that it's invisible to the human eye – it's in the infrared portion of the light spectrum. This isn't necessarily a bad thing, of course: Infrared LEDs are ideal for remote controls, among other things.

How a diode produces light.
(c)HowStuffWorks

Visible light-emitting diodes (VLEDs), such as the ones that light up numbers in a digital clock, are made of materials characterized by a wider gap between the conduction band and the lower orbitals. The size of the gap determines the frequency of the photon – in other words, it determines the color of the light. While LEDs are used in everything from remote controls to the digital displays on electronics, visible LEDs are popular thanks to their long lifetimes and miniature size. Depending on the materials used in LEDs, they can be built to shine in infrared, ultraviolet, and all the colors of the visible spectrum in between.

While all diodes release light, most don't do it very effectively. In an ordinary diode, the semiconductor material itself ends up absorbing a lot of the light energy. LEDs are specially constructed to release a large number of photons outward. Additionally, they are housed in a plastic bulb that concentrates the light in a particular direction. Most of the light from the diode bounces off the sides of the bulb, traveling on through the rounded end. 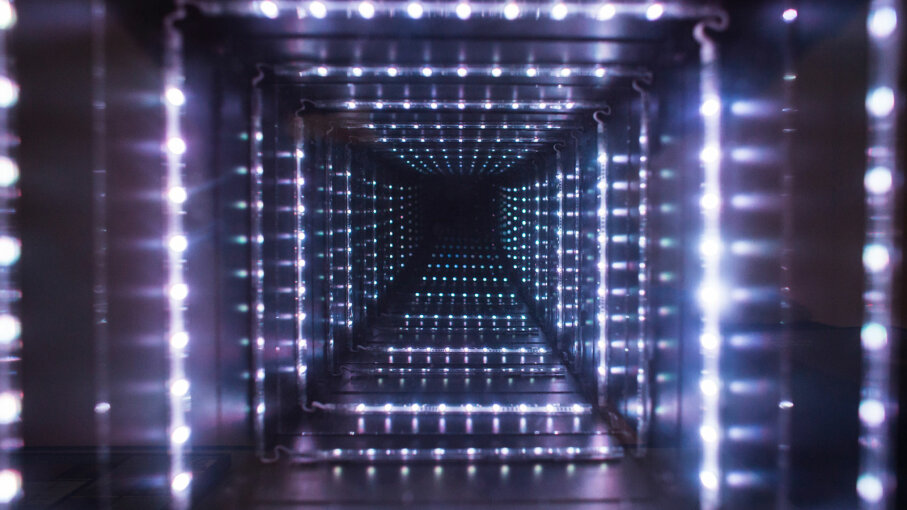 Enter the LED light bulb. LEDs offer the advantages of CFLs – lower power consumption and longer lifetimes – without the downside of toxic mercury [source: Scheer and Moss]. For example, a 60-watt incandescent light bulb draws more than $150 worth of electricity per year and provides about 800 lumens of light; an equivalent compact fluorescent uses less than 15 watts and costs only about $35 of electricity per year. LED bulbs are even better, drawing about 8.5 watts of power, costing about $21 per year, and lasting 25,000 hours or longer [source: EarthEasy]. There are only 8,760 hours in a whole year – imagine how long an LED bulb would last in the average home!

That makes LEDs sound pretty great – and they are – but there are reasons incandescent and compact fluorescent bulbs are still around. The biggest reason is price; LED bulbs cost more than the other options, even though prices for LED bulbs have come down in recent years. However, their longer life spans and dramatically lower power usage help make up for the higher barrier of entry.

In addition to the high cost barrier, LEDs are vulnerable to high temperatures. If LED circuitry gets too hot, more current will pass through the junction mentioned earlier in this article. When the junction gets too hot, it causes the bulb to burn out [source: LEDs Magazine]. And even though LEDs are free of mercury (unlike CFL bulbs), they may contain other dangerous elements such as lead or arsenic [source: Scheer and Moss]. Further, one study found light pollution increased with the use of LED bulbs [source: Brady].

Some people also prefer the look of incandescent light, feeling they're warmer than the yellowish-looking CFL bulbs and the bluish brightness of LEDs. The difference in lighting types can take some adjustment, but LEDs are also available in a variety of hues. LEDs are dimmable (unlike CFLs) and are perfect for encouraging plant growth, since they efficiently put off tons of light without producing heat that could potentially be damaging to plant life.

While CFLs and incandescent bulbs are limited to the color of their enclosure, some LED bulbs can be changed to emit millions of colors. These bulbs are typically more expensive than their white LED bulb counterparts, but they can be programmed to change color with the time of day, giving people more control over their environment.

LED TVs and the Future of Light Emitting Diodes 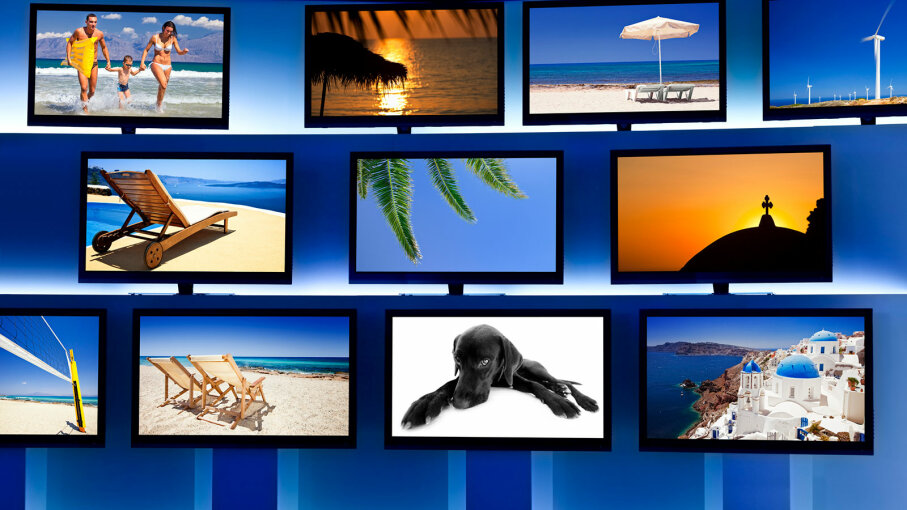 LEDs have come a long way since the early days of lighting up digital clock faces. In the 2000s, LCD TVs took over the high-definition market and represented a huge step over old standard definition CRT televisions. LCD displays were even a major step above HD rear-projection sets that weighed well over 100 pounds (45.4 kilograms). But LED technology changed the market. While LCD TVs were far thinner and lighter than massive rear-projection sets, they still used cold cathode fluorescent tubes to project a white light onto the pixels that make up the screen. Those add weight and thickness to the TV set. LEDs solved both problems.

Have you ever seen a gigantic flat-screen TV barely an inch thick? It was probably an LED television. Here's where the acronyms get a bit confusing: Those LED TVs are still LCD TVs, because the screens themselves are comprised of liquid crystals. Technically, they're LED-backlit LCD TVs. Instead of fluorescent tubes, LEDs shine light from behind the screen, illuminating the pixels to create an image. Due to the small size and low power consumption of LEDs, LED-backlit TVs are far thinner than regular LCD sets and are also more energy efficient. They can also provide a wider color gamut, producing more vivid pictures.

There are several different types of LED-backlit sets are on the market – and not all are created equal. Many sets use white LED edge lighting to shine light across the display. The only real advantage afforded by these sets is thinness. RGB LED-backlit sets, on the other hand, provide improved color. Some configurations even allow for a technique called local dimming, where LEDs in different parts of the display can be brightened or dimmed independently to create a more dynamic picture [source: Morrison]. And that highlights one more great advantage of LEDs over CFLs: Because the LEDs can actually be instantly toggled on and off, they produce awesome black levels in dark scenes. Since the white fluorescent lamps have to remain on during TV use, some light tends to bleed through and lighten the picture in dark scenes.

Some of the newest LED displays are made with organic light emitting diodes, or OLEDs. The organic materials used to create these semiconductors are flexible, allowing scientists to create bendable lights and displays – some manufacturers have already started producing smartphones and other devices that use smaller OLED screens. As the technology allows better and larger displays, you may start seeing them in places you would never have been able to find a screen before. OLEDs also allow individual pixels to be turned completely off, letting viewers see true black.