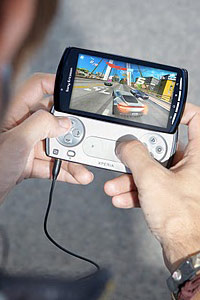 The Xperia Play is hoping to stand up to the new PlayStation Vita by offering gamers all the features of a smartphone in the same package as a handheld gaming device.
Image courtesy of Sony Ericsson

The PlayStation Vita hardware doesn't stray too far from the technology at work in powerful smartphones. It's essentially a smartphone cranked up to 11: Dual-core phones premiered on the market in 2011, but the PlayStation Vita pairs a quad-core ARM Cortex-A9 processor with an unusually powerful SGX543MP4+ GPU to one-up phone hardware [source: Tested]. Those tech elements add up to more powerful hardware for game developers to take advantage of.

The Vita also offers real analog sticks for control and a flash-based storage medium, which allows developers to publish much larger games than they can on download-only platforms like Android. The Vita supports downloads, too -- it can access the PlayStation Network and the PlayStation Suite -- but full-size video games will still be sold at retailers. Essentially, the PlayStation Vita comes far closer to emulating the home console video game experience than the Xperia Play.

The PlayStation Vita supports deeper, longer, more graphically impressive games. The Vita also offers more accurate controls for 3D games than the Xperia Play does, thanks to its twin joysticks. The Playstation-branded handheld is more expensive up front at $250, but costs less over time than the Xperia Play, which retails at $200 plus a monthly contract [source: Verizon]. In every regard, the Vita is a better gaming platform -- but is that what people want? The success of phone gaming, especially on Apple's iOS, has changed the way we look at and play games. Most games on iOS and Android cost $5 or less. Tons of them are free. The $40 you spend on one Vita game could be spent on several dozen iPhone or Android games that are designed to be played in short bursts during a few minutes of downtime.

By focusing on powerful hardware, the PlayStation Vita is trying to bring the video game console experience into a handheld device. While it offers superior hardware, the Vita may have trouble gaining a large audience, simply because the tastes of mobile gamers have changed. Realistically, it will still sell more units than the Xperia Play -- there is only one PlayStation Vita, but there are many, many Android phones. But the Play offers an in-between solution for gamers who want physical buttons and aren't interested in a dedicated game device. And, of course, it makes phone calls.