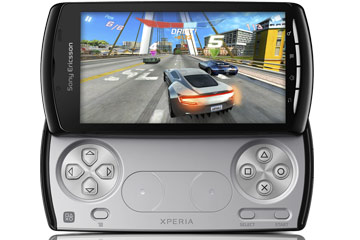 The game controls on the Play mimic the ones you'd find on a PlayStation controller, but are smaller in scale.
Image courtesy of Sony Ericsson

Google Android’s critics point to the issue of fragmentation as one of the platform’s major weaknesses. New versions of the Android operating system come out more frequently than carriers and device makers are willing or able to keep up with, meaning old devices often take months and months to receive updates or never get them at all. App compatibility can be a challenge, since there are so many OS versions out there. Sony’s not helping the situation: With the PlayStation Suite, the company is launching yet another service on Android that only works on certain devices.

Sony has described the PlayStation Suite as a "hardware neutral" platform for distributing classic PlayStation One games and other software to compatible Android devices [source: Engadget]. As of mid-2011, the company hadn’t specified what those compatibility requirements are. Android devices will definitely have to run version 2.3 or later of their OS to access the PlayStation Suite. Only a few devices are known to be compatible: the Xperia Play, Sony’s PlayStation Vita handheld and two of its Android tablets [source: Sony].

The Xperia Play’s processor and graphics processing unit are average hardware, so theoretically a great many smartphones could run PlayStation Suite games with touch controls instead of the dedicated gamepad. Compatibility might come down to which developers partner with Sony to offer the service. While the plan is to have a wide selection of PlayStation classics and new software available through the Suite, Sony offered only a single game pre-loaded on the Xperia Play at launch: "Crash Bandicoot." Other games available exclusively to the Xperia Play through the Android Market are "MediEvil," "Syphon Filter," "Cool Boarders 2," "Destruction Derby" and "Jumping Jack Flash" [source: Know Your Mobile].

The Xperia Play’s game library will be expanded throughout its life as the PlayStation Suite launches and more game developers add support for the Play’s gamepad controls. Sony landed a temporary exclusive for the Android version of popular game "Minecraft" -- it will be available on the Xperia Play before any other Android device [source: Ars Technica]. Because Sony Ericsson is pushing the Xperia Play as a gaming device, the quality of the games on the platform will be one of the deciding factors in its success. That brings up an important question: Will Sony gamers choose the PlayStation Vita handheld, a dedicated gaming device, over the weaker Xperia Play?