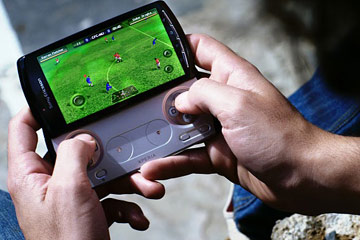 The Xperia Play features slide-out game controls so you can replicate the console gaming experience right after you finish a phone call.
Image courtesy of Sony Ericsson

Since the launch of the original PlayStation, Sony has stuck with a proven controller design familiar to millions of gamers. The Xperia Play lacks the dual shoulder buttons and curved plastic design of the famous DualShock controller, but the face buttons are classic PlayStation. When the Xperia Play is held upright like a phone, the gamepad slides out of the left side of the device and is designed for a landscape grip. A directional pad sits under the left thumb and four face buttons labeled with X, O, Square and Triangle sit under the right. Shoulder buttons sit at the top of the slider on each side where index fingers would rest in a normal grip, and Start and Select buttons are located out of the way at the bottom right corner of the slide pad. Finally, an Android menu button sits unobtrusively below the cross-shaped D-pad.

With only those features, the Sony Ericsson Xperia Play would be the spitting image of another handheld device: the PSP Go. The Play's designers obviously leaned heavily on the Go's design, but added a touch sensitive area between its D-pad and buttons meant to simulate real analog joysticks. The so-called "analog touch joysticks" are more similar to a touch-screen display than a physical joystick, but they provide an extra control option that doesn't obscure the screen the way typical touch controls do. The sliding pad has a spring mechanism that snaps it open or closed once enough pressure is applied to slide the pad halfway [source: Engadget].

The D-pad can be used to navigate around the Xperia Play's screen in place of the touchscreen. There are a few other buttons on the device standard on most Android phones: Back, Home, Menu and Search buttons rest below the touchscreen and the necessary volume rocker and power buttons are both accounted for. When it's closed, the Xperia Play really does look the part of an ordinary smartphone. And for the most part, the device runs standard Android software and games. This leads to a bit of a problem: Games must be designed to support the Xperia Play's gamepad controls, which means most Android apps won't make use of the D-pad or face buttons.