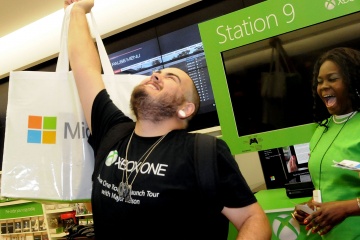 The first consumer to buy an Xbox One at the midnight release event at the Florida Mall in Orlando, Fla. raises his purchase triumphantly in the air.
© Gerardo Mora/Getty Images for Microsoft

The camera- and microphone-laden Kinect, first introduced for the Xbox 360, gets some major improvements with Kinect 2.0, and you may be able to largely eschew physical controllers for menu and app navigation. On the previous console, you could use voice commands via the optional Kinect to select and run menu items that were displayed on the screen, and you can still do this on Xbox One using the "Xbox select" voice command. But Kinect 2.0 has been redesigned to be more intuitive and responsive, and a greater variety of commands have been integrated into the system. You can call many of them out at any time, with no need for menus.

When you first log in, the Xbox will use Kinect to create face and skeletal models of you which will be used to create your biometric ID in the system. After this is done, the console will recognize you and automatically sign you in when you walk into the room, bringing up your personalized home screen. For privacy reasons, your biometric information is only on your machine, not the cloud. If someone gives a command that requires login to an account, Kinect pinpoints where the voice came from and uses the biometric model to determine who is speaking.

Kinect 2.0's field of vision is 60 percent wider than that of the earlier version. It can see in darker areas with its active infrared (IR) camera and uses 3D geometry to tell your position. You can use smaller hand gestures to control games and other apps. It can even detect whether your hand is open or closed, and whether you are off balance, as well as your heart rate and facial expressions. The new Kinect can track six people at a time rather than the previous version's two, and it recognizes more joints per person. It uses a five-microphone array for advanced noise isolation that helps it determine who it should be listening to in a noisy room.

You can say, "Xbox on," to turn the console on, because when it's off, it remains in standby mode listening for the on command. Kinect's built-in IR blaster can even send signals to other devices attached to the Xbox One, such as your cable box and TV.

Despite the fact that it comes standard with the Xbox One, Kinect is still a separate component that can be turned off through the settings or unplugged, and you can use the Xbox One without it if you wish.

There is another novel way to control your console. If you download the latest version of the Xbox SmartGlass app, you can use your iOS, Android, Windows Phone or Windows 8 tablet or smartphone as a controller. It allows you to use your mobile device's touchscreen capabilities to move a cursor around, swipe to new screens, type text using your device's virtual keyboard or select items with a tap. It certainly makes surfing the Web easier. And developers can use it to extend apps by providing second-screen features, such as game hints or movie commentary.

You can also use SmartGlass to view your achievements and game progress, watch recorded clips, send and receive messages and pin content for later access from your console. There has even been mention of the ability to transfer movies and TV shows from your mobile device to your Xbox and back. The available features will vary between the different phone OSes, however.