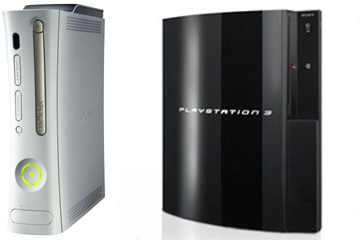 Battles between Master Chief and the Covenant or Kratos and Ares have nothing on the wars Microsoft and Sony wage against each other. For years, the two companies have fought to gain supremacy in the home video game market. Microsoft's Xbox 360 and the PlayStation 3 are both powerful machines capable of running games with amazing graphics and online play. But which one is supreme?

From a purely technical standpoint, the PlayStation 3 has more horsepower. The PS3's Cell processor can perform more operations per second than the Xbox 360 CPU, even though both chips clock in at 3.2 gigahertz. The PlayStation 3 has Blu-ray player technology, allowing you to watch movies in Blu-ray format. Blu-ray discs can store more information than standard DVDs, which means games that may require several DVDs may only need a single Blu-ray.

Both the PS3 and Xbox 360 have online capabilities. But Sony suffered an attack by hackers in the spring of 2011. In that attack, hackers managed to steal the information of around 100 million Sony customers, including around 75 million PlayStation Network users. Sony took the network offline for nearly a month. Both the PSN and Xbox Live services have free and paid options that give you access to different features. The features available on the free version of Xbox Live are limited.

Despite all this, I find the Xbox 360 to be the superior machine. I own both and have played many games on each platform. But I prefer the controller, interface and online support on the Xbox 360 to the PlayStation 3. If a game comes out for both consoles, I always pick up the Xbox 360 version. I might miss out on some exclusive content -- such as playing Kratos in the latest "Mortal Kombat" game -- but I enjoy the experience more on the 360.

But which do you prefer? Are you a PlayStation fan or an Xbox fanatic? Does exclusive content sway you? And if you own both, which console do you play the most and why?

How are video games regulated in the U.S.?
How Piano Wizard Works
How Guitar Hero Works