Reactions to the Wii U Launch 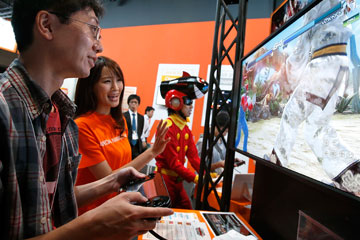 It looks like attendees at the Tokyo Game Show in September 2012 had fun playing “Tekken Tag Tournament 2” on the Wii U, but we’ll have to wait and see if the console’s a success.
©Kiyoshi Ota/Getty Images

It's rare for brand-new pieces of technology to be perfect at launch, and the Wii U is no exception. All of the console's online features were enabled in a large day-one software patch that took many users hours to download. The president of Nintendo even apologized for the inconvenience [source: Joystiq]. Critics have also pointed out that the Wii U's operating system performs slowly and can take several seconds to browse from one menu to another.

The GamePad has been criticized for its resistive touchscreen, which lacks multitouch capabilities, and for its short battery life of only three to five hours. The GamePad comes with a separate charger for recharging its battery, which means the Wii U requires two separate power plugs in your home. (The deluxe console does ship with a charging cradle for the GamePad to make charging the device slightly more convenient.) While many launch games aren't especially creative with the GamePad controller, that may change over the lifetime of the console -- it truly is the Wii U's most defining and important feature.

The Wii U's external hard drive support is a blessing and a curse. Expandable storage will be cheap compared to the proprietary hard drives Microsoft requires for the Xbox 360, but it will also almost certainly be a necessity. Even the Deluxe Wii U's 32GB of storage is relatively small, especially considering Nintendo now offers full downloadable games via the eShop. Launch title "Tekken Tag Tournament 2" takes up nearly 17 gigabytes of storage [source: Siliconera].

Writers also criticized the convoluted transfer process of original Wii content to the Wii U and the system's backwards compatibility, which launches into "Wii Mode" to play old Wii games. Worst of all, Wii Mode only supports 512 MB of storage -- the amount available in the original Wii -- meaning all the Wii U's extra space is worthless when it comes to old Wii games [source: Kohler].

The good news is that most of the Wii U's issues can be improved. Nintendo can make the operating system faster. Its missing features, like Nintendo TVii, will arrive post-launch. And if developers put their minds to it, they may create some incredibly unique games with the functionality of the GamePad. The Wii U has the potential to change gaming like the Wii did, but at launch it's not quite there yet.

As a longtime Nintendo fan, I hope that the Wii U turns out to be a great device. Nintendo changed the gaming world with the Wii in 2006, but after a few years, the console's outdated hardware caught up to it. Since the Nintendo 64, Nintendo has struggled to find good third-party support while delivering great games of its own. The Wii U launch is essentially a great proof-of-concept. Now Nintendo has to deliver with great games and software improvements.