The Wii U Console 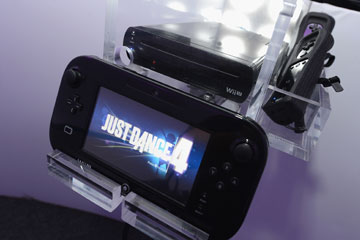 While the Game Pad is entirely new, the Wii U console itself doesn’t look radically different from its predecessor.
©Michael Buckner/Getty Images for Nintendo

At first glance, it wouldn't be too hard to mistake a brand new Wii U for the six-year-old Wii. Nintendo's new console retains the same general shape and size of the Wii, but with rounder edges and a longer body. The front of the console retains its simple design with a slot-loading disc drive, power and eject button. There's also a sync button for wireless controllers, and a small panel under the disc drive pops open to reveal two USB 2.0 ports and an SD card slot for expandable storage. The back of the console hosts the rest of its ports: two more USB 2.0 slots, power, HDMI for audio/video output, a port for the Wii sensor bar, and an extra audio/video port. Just like the first Wii, the Wii U has no Ethernet port -- it uses built-in WiFi for Internet access.

Since this is Nintendo's first HD console, most of the big changes are on the inside. The Wii lagged far behind the Xbox 360 and PlayStation 3 in processing and graphical power when it was released. The Wii U doesn't have that problem, but it may in the future -- according to many game developers, the Wii U is roughly equal in power to the PS3 and Xbox 360, despite being released over half a decade later.

The Wii U runs on a triple-core IBM PowerPC processor, reportedly clocked at around 1.24 GHz. Its graphics are handled by an AMD Radeon GPU, reportedly clocked at around 550 MHz [source: IGN]. The system divides 2 GB of gDDR3 RAM, running at 800 MHz, between games and the Wii U's operating system. Numbers can only tell you so much about a console, of course. For example, even though the Xbox 360's CPUs run at a much faster 3.0 GHz, the architecture of those chips doesn't make them three times faster. For example, better out-of-order-execution, which makes computer processors more efficient, making the Wii U and the older consoles roughly equivalent. On the flip side, while the Wii U has more RAM than the Xbox 360 or PS3, it has slower memory bandwidth [source: Kotaku].

The Wii U uses internal flash memory for storage. Nintendo offers two different versions of the console, Basic and Deluxe, which are mainly distinguished by the amount of internal storage they offer. The white $300 Basic set offers 8 GB of flash memory for storing downloaded content, game saves, the operating system, and other data. The black $350 Deluxe console ships with a copy of the game "Nintendoland" in the box and offers 32 GB of internal storage. Thankfully, Nintendo also supports USB external hard drives for storage, which makes it cheap and easy to add storage space to the Wii for downloaded games.