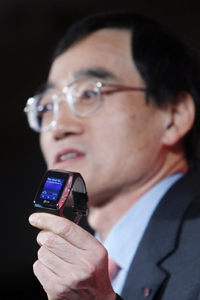 The word spread like wildfire across the floor of the 2009 Consumer Electronics Show (CES) -- LG had a gadget that was not to be missed. It wasn't a new kind of HDTV or stereo system. It didn't even take up a lot of space in the booth. It was a sleek and stylish watch. But it was also a phone.

Before long, bloggers and reporters dubbed it the "Dick Tracy" watch. In the classic comic strip, Dick Tracy communicates with his allies using a two-way wrist radio. The watch from LG didn't resemble the bulky gadget on Tracy's arm. It looked far more advanced.

The official model number for the watch phone is the LG-GD910. It resembles a prototype LG brought to CES in 2008 that featured a three-button interface. To make calls, you had to use the buttons to scroll up and down a virtual keypad and select each individual number. It was an interesting concept, but it didn't get a lot of attention.

The LG-GD910 is a different story. It received a lot of attention from journalists at CES 2009. Part of that may have been the mystique of the device -- LG didn't let anyone other than LG representatives handle and operate the watch. It was also attractive and featured a 1.43-inch (3.63 centimeter) screen. Another reason for the increased level of interest was a new interface. Instead of maneuvering through menu choices and using a keypad with physical buttons, the LG-GD910 has a touch-screen interface.

­Contrary to what you may be thinking, you don't have to hold the LG-GD910 up to your ear to listen in on conversations and then put your wrist in front of your mouth to talk. The speaker and microphones in the watch work well enough to use it as a speakerphone. But that's not your only option. LG incorporated Bluetooth technology into the watch phone. You can pair a typical Bluetooth earpiece to the watch if you prefer. 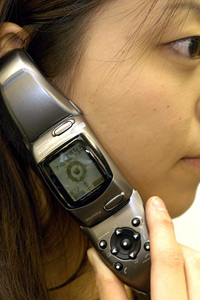 To learn more about cell phones and other gadgets, take a look at the links on the next page.

You Don't Really Need Apps to Save Your Smartphone's Battery
Could someone stalk you using your own smartphone?
Is it smarter to use a retailer's mobile app or their Web site to shop with them?