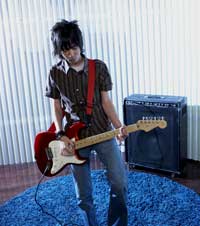 Why so glum, solo rocker? Get on the Net and form a virtual band! See more guitar pictures.
Dave Negal/Getty Images

We can carry out almost all forms of basic human interaction online. We can pay our bills, m­ake new friends (and keep up with old ones) and even get involved in a romantic relationship. Social networking sites have racked up tens of millions of users because so much of people's daily lives now revolve around computers and the Internet.

The same thing goes for the music industry. For starters, you've got iTunes, YouTube and MySpace Music. Then there are band and record label Web sites and file sharing sites to spread the love around. Most of the time, the musical content we listen to and watch online was recorded and produced by people in the real world, not the virtual world, and uploaded for our pleasure.

But now, folks, we've reached the age when scattered musicians can unite their rhythmical powers through the World Wide Web to make vir­tual bands. Virtual bands, also known as Internet bands, are bands in which the members do not meet and make music face to face, but online. Sounds preposterous, right? How on earth can they practice, much less compose songs together?

A growing number of Web sites offer people the opportunity to do compose music online. They marry social networking with music mixing and uploading technology. Users decide what projects they wish to add their special touches to and how actively they want to get involved.

How do these sites work? How can you post a wicked bass track, for instance, and watch it magically transform into a song with nine other instruments and vocals? Find out on the next page.­

Perhaps the most successful virtual band -- in the sense of a band comprised of people who do not meet in person -- is the . Indie fans adored the 2006 album "Give Up" from the songwriting team Ben Gibbard and Jimmy Tamborello. As the name implies, the duo communicated via snail mail rather than the Internet. Tamborello originally sent Gibbard music tracks to which Gibbard added vocals, melodies and other instruments.

How can virtual bands work? 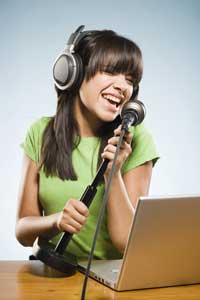 If you have a computer and a Web connection, you can cut your own tracks.
Mark Andersen/Getty Images

Virtual bands are like potlucks. Someone brings a salad, another person a casserole and so on. The host can theme it and request certain things, but when the time comes to eat, that meal depends on the separate contributions of the individuals involved.

Likewise, the first step of forming a virtual band starts with you. Whatever your musical talent -- saxophone, oboe or good ole fashioned guitar -- computer software has made it a cinch to record yourself showing off your skills.

Macintosh computers come standard with the recording program called GarageBand. Pro Tools is a popular program often used by professional musicians. But for that type of quality, you'll have to pay. Other software you can purchase includes Tracktion, Sonar and Nuendo. For freeloaders, Audacity is an open source software that you can download to record. Programs like these save your music into file formats such as MP3, wav and aiff. Once you save your tracks, you're ready to share.

Three popular Web sites have combined social networking with music production: Kompoz, Indaba and eJamming. On Kompoz, people can upload their tracks or songs, allowing other people to add tracks or sample them. You can also add to other people's stuff as well. That means your melody could end up in any number of combinations. Many times, users will work on a variety of projects at one time instead of devoting themselves to a specific band. From there, other members can comment on the tune and rate it. Project creators determine the type of license agreement up front to cover the finished product.

Indaba has the same Facebook-like social networking frame but has its own mixing program that registered users can access. With this program, you can produce music on your own, request help from other members, or close off the session to a select few.

It also lays out guidelines regarding who actually owns the song (which isn't as clear with other sites). Before users begin collaborating, the site allows them to lay down their own guidelines regarding who owns the rights to the song, whether anyone will receive payment for their services and other legal issues [source: Sarno]. Indaba then archives the communications in case of a dispute down the road if, let's say, the single strikes a positive chord with the public.

If you want to practice in real time, eJamming is where it's at. EJamming goes beyond uploading and mixing tracks online. Here, a virtual band can practice playing together and collaborate without physically being in the same room, or country, for that matter. The founders of the Web site patented the technology to link a bongo player in Taiwan with a didgeridoo master in Chicago by minimizing the lag time caused by communicating over a network. (Side note for Rock Band video game fans: this lag issue is what prevented the first version from offering the World Tour mode for online competition.)

According to the eJamming Inc. patent, the software first determines the network delay between the people who wish to jam. Then, when the musicians start playing, the network transmits the sound in accordance to the delay, keeping everyone in sync. For instance, if there is a two second delay between you and another person in Australia, it would normally result in off-kilter melodies. However, if the network reads that delay and matches up the timing when both of you receive the data, you'll hear a harmonious product. Aside from real-time jam sessions, eJamming also allows for recording sessions, using the same technology. According to the site, people participating in a collaborative track will share a copyright for the final product.

So we now know that people can meet, exchange tracks, mix and record online. But what about that integral component to band membership -- performance? Why pour your time and energy into a musical collaboration if you can never receive the glorious adoration of fans?

On the next page, we'll address how some bands use the Web for performing, as well as another take on the concept of a virtual band. 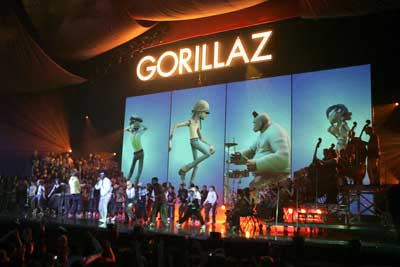 You can waste away days watching recordings of bands on YouTube and other video sites. But what about attending a live, virtual concert?

The Web site Second Life has hosted a number of live concerts, attracting acts as big as Suzanne Vega and Duran Duran. It even hosts an annual music festival called Second Life Fest. People can perform on Second Life by sending a live music stream to the site. Even if you aren't a Second Life landowner, you could snag a gig from someone who runs a club or music venue. DJs can also use the platform to spin.

Of course, when performing in Second Life, people don't see you, but rather an avatar you've designed.

Case in point: the Gorillaz. The Gorillaz are the most commercially successful virtual band out there, having released two studio albums with a handful of hits, such as "Clint ­Eastwood." And who exactly are they? That depends.

The people making the music are a pair of dudes from England -- Damon Albarn from the real band Blur and Jamie Hewlett, creator of the "Tank Girl" comic, to be precise. In the virtual world, the Gorillaz are a platinum-selling foursome of animated characters named 2D, Murdoch Niccals, Russel Hobbs and Noodle, all drawn by Hewlett. They live in the fictional Kong Studios in Essex, England. While the characters star in the music videos, Albarn and Hewlett sometimes appear on stage for live performances.

­Probably the first successful virtual band was Alvin and the Chipmunks that produced squeaky hits such as "Hula Hoop" in the 1960s. Other more recent virtual bands include U.K.-based VBirds, a group of four animated robots. But, like virtual bands of people linked through the Internet, touring a group of animated singers and musicians can be challenging, if not impossible. Perhaps for that reason no other virtual band has met the same success as the Gorillaz.

For related information about virtual bands and the music industry, roll on to the links on the next page.

Noob or Not? How Much Do You Know About Fortnite?
How Xbox Live Works
Virtual Reality Arcades Are Getting Real in the U.S.