by Maria Trimarchi
Prev NEXT
2 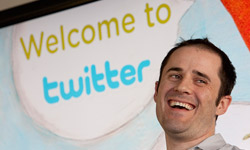 Twitter co-founder and CEO Evan Williams is hanging on to the company for now.
David Paul Morris/Getty Images

Well, yes, this is actually true, though it's not such a bad thing. How and when will it actually earn any money? Twitter's venture capitalists aren't worried about it yet. To hear the co-founders and investors tell it, Twitter's emphasis right now is on building an audience and the revenue streams will come second to that -- an "if you build it they will come" (or "pay" in this case) sort of scenario.

And that myth that Twitter will be acquired? Twitter has had courting parties. In 2008, Facebook expressed interest in acquiring Twitter for $500 million of its stock plus a cash component but was turned down. In 2009, rumors swirled that Google would acquire Twitter. Co-founder Biz Stone, however, posted on the Twitter blog that the "goal is to build a profitable, independent company and we're just getting started" [source: Twitter Blog].