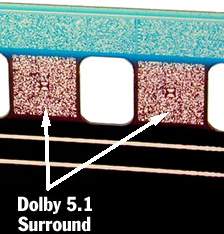 Dolby followed suit with its own digital format, Dolby Digital®. Dolby Digital is also known as Dolby Digital 5.1® (for five audio channels and a subwoofer channel), Dolby AC-3® (for Dolby's third audio-coding design) or Dolby SR-D® (for Spectral Recording Digital). Dolby Digital has the same basic speaker arrangement as DTS, and it sounds similar, but it works on a very different system. Instead of recording audio on CDs, digital information is encoded as tiny patterns on the film in the space between the sprocket holes.

The Dolby Digital reader shines an LED through this pattern as the film passes through the projector. On the other side of the film, the light hits a charge coupled device (CCD), the same sort of light sensor used in a digital camera (see How Movie Sound Works: Dolby Digital to learn more). The CCD registers an image made of hundreds of little specks that represent 1s and hundreds of spaces between the specs that represent 0s. The Dolby Digital Processor unit interprets the digital information in this image as an audio signal.

Dolby Digital Surround EX® works the same way as Dolby Digital, but it includes an extra surround channel. The extra channel drives speakers along the rear wall of a theater. Like the front center speaker, it can be used to anchor sounds from the left and right surround channels.