Browse the article How Sphero Works 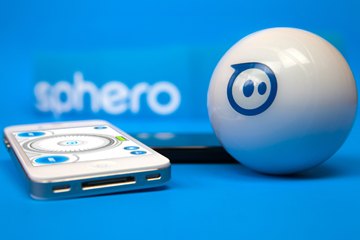 Does Sphero represent the next generation in gaming systems?
Courtesy of Orbotix

Before you can answer if Sphero is a hero or a zero, you'll probably need to know what the heck-ola a Sphero is and why even President Barack Obama wanted to take it for a spin.

Sphero is built by a company called Orbotix, and its co-founder, Ian Bernstein, says that Sphero is the next generation in gaming systems. You've got your old-school Atari, NES, and even PlayStation, with their wired controllers. Then you've got the Nintendo Wii with its magic wand and the Xbox and its Kinect, which took gaming and the controllers into the third dimension. Sphero is the next step -- gamers will no longer have to just stare at the screen. Physical reality -- your surroundings -- will come into play.

Which is lovely, but if you've never seen Sphero, describing it in such highfalutin terms isn't helping, so here's the lowdown: It's a ball. A white ball. It's got a little blue sort of face-like logo on it. It glows in different colors. And yes, at a demo in April 2012, President Obama had a go with Sphero, saying, "Excuse me, give me some space to drive my ball."

All right, let's bust this little guy open and see what Sphero's got going on in there. 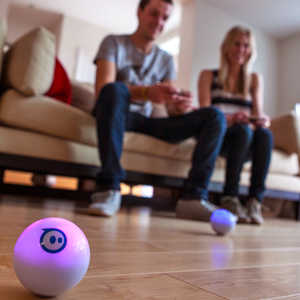 What's going on in there?
Courtesy of Orbotix

Inside the glowing white ball, you'll find a tiny Segway scooter, just like the one in "Paul Blart: Mall Cop," with a miniature mustachioed Kevin James proudly serving his Sphero.

All right, there's no miniature mall cop, but there is a sort of miniature Segway inside. There's a gyroscope and an accelerometer that talk to your tablet (or phone or what have you) and two little rubber wheels. The sensors give yaw, pitch and roll information to whatever app you're playing with so that the computer knows what Sphero is up to -- that little sneak. A counterweight (you can think of it as a tiny Kevin James, if it helps) gets the mechanism moving when you tell it to.

The little wheels run around the inside of the ball like a hamster in a wheel. That is, if that hamster had a spring-loaded bearing pressing down on its furry little back to make sure his tiny hamster feet never leave the inside surface of the ball, even when cornering at speed. Maybe you could put the hamster in the Paul Blart uniform -- because that would be adorable.

We all know, however, that it's what's on the outside that counts. "We sort of designed it to be tough," Bernstein said, "but it turned out to be way, way, way tougher than we'd ever thought." The casing is made of high-density polycarbonate similar to Nalgene bottles, which the very technological Bernstein calls "crazy strong." Sphero has been dropped 25 feet (7.6 meters) onto carpet, thrown and driven by incompetent television hosts to no ill effect.

But can it pass the ultimate test? The ultimate challenge for a ball that can connect to a computer? The Internet wants to know: Can Sphero take on my cat? "Absolutely," said Bernstein. "I don't think there's any possible way a cat would hurt it." Straight from the co-founder's mouth. Cat-loving Internet, let the ridiculous videos commence.

Back that app up, Sphero.

To get Sphero to do anything remotely cool, with or without your cat's involvement, you gotta have apps. Right out of the box, Sphero comes with an app that lets you control it and at least get some basic cat-freaking-out responses from it.

Sphero's makers at Orbotix aren't really into making the apps themselves. They want to go further with the robotic stuff, so they're leaving the control of Sphero up to you. There are already games like Sphero Golf, Sphero Chromo, Last Fish and Sphero Macrolab, with new apps being developed all the time. The folks at Orbotix didn't even know about Shapesynth, which creates sounds based on Sphero's movements, until it came out.

Not only does Orbotix put all the information an app developer would need on its Web site, but it also puts on a bunch of hackathons across the country. It was during the Boulder, Colo., hackathon that President Obama's path crossed with Sphero's.

"It's all free," Bernstein said. "Anybody who wants to come, beginners to experienced programmers and artists, can come hang out and build some apps over the weekend. We have a small prize at the end of the weekend, and then we give them four weeks to polish their apps before we give the big prizes away."

How big are those prizes? How big do you think $13,000 in cash is? Because that's what Orbotix gives away at each hackathon.

The Boulder event has so far brought two apps to the app store: One is an Etch-a-Sketch app where you tilt Sphero to draw and shake Sphero to clear the screen; the other is Monster Bash, where your Sphero and another player's Sphero don virtual monster suits and chase each other around until one bashes into the other. "It's basically dog fighting," said Bernstein. There's no limit on the number of Spheros that can play.

Want to create your own cat-harassment game for Sphero? Hit up Spheroverse.com. You can see what the hackathon people have already come up with and find a Sphero-shaped hole for your own app-developing heart to fill.

Will Sphero make my cat obsolete? 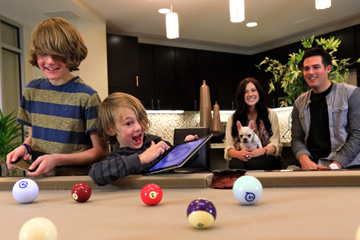 Orbotix intends to use Sphero to change the way humans interact with games.
Courtesy of Orbotix

So if regular geeks across the country are creating the apps that make Sphero do cool stuff, then what are the guys at Orbotix doing? Sitting around in their white molded-plastic chairs with their feet propped up on glass-topped desks while robot butlers bring them virgin martinis? Hanging out with Jay-Z and Beyoncé on a yacht in the Mediterranean? Spending all their time chasing cats with their Spheros?

They may do at least some of these things (definitely the cat one), but they're also looking to use Sphero to change the way humans interact with games. They call the new technology "mixed reality."

Imagine you've got a Sphero on the floor and an iPad in your hands. You use the camera in your iPad to look at Sphero rolling around down there, so you can see Sphero on the screen. Easy peasy. But Orbotix can track where Sphero is in real time and overlay virtual 3-D objects on top of the physical ball.

Now, what you see on the screen isn't a white plastic ball; it's a 3-D dragon. You use the app to pilot Sphero in the real world, but you watch the dragon on the screen. When Sphero runs into a real, actual wall, stars circle the stunned dragon's head and he gets mad. As Bernstein points out, "That's something that's not really possible without a physical device." No Wii controller, no Kinect, cares if you bounce off a wall, as some of us found out right before our trips to the emergency room.

This technology would work most easily and obviously with a virtual pet. Sphero could start out as an egg that you roll around and feed with your app controls. It hatches, it gets bigger, and then you have virtual objects that you can touch on your iPad to interact with Sphero.

Maybe the question shouldn't be, can my cat destroy Sphero, but rather, will Sphero make my cat obsolete?

I had never heard of Sphero before writing this article, but when I saw it, I kind of wanted one. Then I saw the price -- it's $130! That would require writing quite a few extra words (very, very, very many extra words) to fit that into my writer's budget, and for what? To harass my cat? So I gave up on the dream. Then I interviewed Ian Bernstein to figure out what was inside Sphero, and my curiosity was again piqued. Shining colored lights and programming intricate dances are really only the beginning for this little ball. And so, because I am fickle like my cat, I want one again. Very, very, very much.