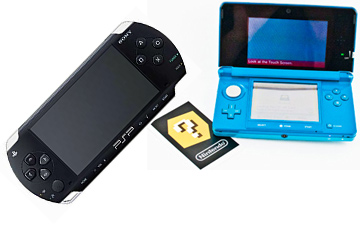 OK, gamers on the go, it's time to draw a line in the sand and decide which handheld video game system rules supreme. Is it Sony's workhorse, the PSP, or Nintendo's newest juggernaut, the 3DS?

The PSP has been around since 2005 and has sold millions of units since its debut. The Nintendo 3DS launched in March 2011. While 3DS sales have been impressive, they fell short of Nintendo's original projections. But which system is better?

The Nintendo 3DS boasts a glasses-free 3-D screen. You can adjust the 3-D effect with a sliding control and even turn it off if you prefer. The 3DS also comes with some augmented reality games built into the system. It's compatible with older DS games, although those games will only play in 2-D. Some gamers might feel a little queasy after playing with the 3-D and augmented reality games.

But the PSP has two advantages over the 3DS: It's significantly cheaper and it has an enormous library of games. As of this writing, the 3DS will cost you around $250, while the PSP is at a more modest $130. There aren't many games out for the 3DS. Sure, you can boot up your old DS games on the system but is that worth the $250 price tag?

Complicating matters is that Sony will soon launch a new product, the PS Vita. The PS Vita will incorporate a rear-mounted touchpad, social gaming, backwards compatibility with downloadable content, location data and augmented reality features. Perhaps the PS Vita can succeed where the PSP Go, Sony's experiment of a handheld device that only played downloadable games, failed.

So which system reigns supreme, the workhorse PSP or the new kid on the block, the 3DS? For my money, the PSP is more compelling. The price is lower, there's a huge selection of games and I don't feel like I've been sailing across choppy waters after playing for more than 15 minutes. But what's your take?

Are there video games designed for moms?
How the PlayStation Camera Works
How the Oculus Rift Works