Slithering On Other Worlds 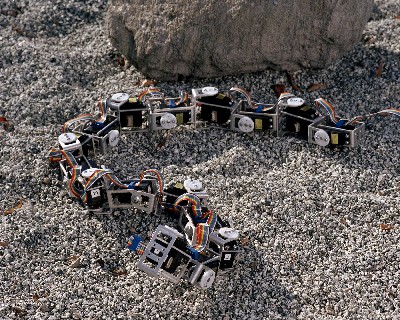 Different types of snakes have different ways of moving through their environments, including side-winding, slithering and inch-worming. Snakebots will be able to perform all of those movements. They will also be able to coil and flip over in order to climb up and over obstacles. So far, the test versions of the snakebot have been remote controlled. Eventually, scientists will have to find ways to give these robots a form of intelligence so that they can operate far from Earth.

"Our first robot does what we tell it to do, no matter what the results are. If it comes to an obstacle, the robot will continue to try to go over it, even if the task is impossible," Haith says. "We made the first, simple robot because we wanted a working snakebot in a day or two, a robot that would help us to think about how a snakebot could and should move."

Work on a more advanced snakebot model, one that would be capable of independent behavior, has already started. The key component of this intelligent snakebot is a sensor-based control. Sensors embedded into the snakebot's body would enable it to make autonomous decisions about its movements. Part of that development will include writing software that will allow the snakebot to learn from its own experience. Such lessons may include how to crawl from soft to hard surfaces, how to go over rough terrain and how to climb scaffolds and get into cracks. "These abilities would help the robot look for fossils or water on another planet," Haith says.

Another improvement that researchers hope to make is to give the snakebot muscles. These artificial muscles would be made out of plastic or rubber material that would bend when electricity is applied. This would lower the snake's weight and make it tough "like an automobile tire," Haith says. One day, an army of these little snakebots could land on Mars and crawl off a lander spacecraft to perform deep searches of the planet. They might even begin to build a base for a future human colony.