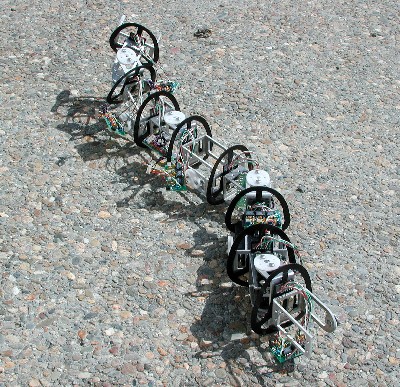 Snakes are unique creatures in that their bodies allow them to get into the cracks and crevices of the world that most other creatures cannot. Lacking rigid skeletons and extremities, snakes can contort their bodies in order to get into tiny holes, wrap around tree branches and slither over otherwise unmanageable rocks. These serpentine qualities are the inspiration for a new type of robotic, interplanetary probe, called a snakebot, being developed by engineers at NASA's Ames Research Center.

Since 1964, NASA has sent 10 robotic explorers to fly by, orbit or rove around Mars, but snakebots will give scientists an unprecedented look at the Martian landscape. Snakebots, which could be ready by 2005, will be able to dig into the loose soil of Mars and burrow down to depths that other robotic probes can't get to. They can slither into the cracks of the planet's surface. "A snakebot could navigate over rough, steep terrain where a wheeled robotic rover would likely get stuck or topple," lead snakebot engineer Gary Haith says.

Snakebots are expected to be more durable and cheaper than any probe that has ever been sent to investigate a planet. In this edition of How Stuff WILL Work, you'll find out how snakebots will explore other worlds, perform construction tasks and maybe even be sold as radio-controlled toys.