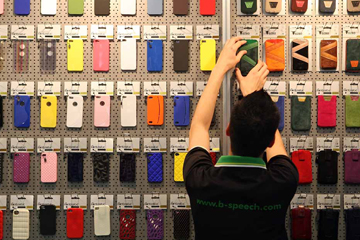 Smartphones: We love them; but man, do we do some dumb things with them. According to a survey commissioned by T-Mobile, nearly half of all smartphone owners have had their phones lost, stolen or damaged. For smartphone owners who have damaged their phones, 37 percent scratched the screen, 29 percent spilled a drink on it, 29 percent dropped it down the stairs and 20 percent dropped it in the toilet (ewwwwww!) [source: Kelton Research Smartphone Protection Survey].

On the other hand, there are a lot of good reasons to use a smartphone case. If you're good about keeping it clean so dirt and grime don't build up between the phone and the case, a smartphone case will usually do a good job of protecting the phone from scratches. A smartphone case can also provide some protection if you drop your phone (though you shouldn't use a case as an excuse to launch your phone off your roof). Though a smartphone case may not make your phone look quite as cool, it can help keep all parts of it working. Dropping a phone may not result in much visible damage, but without a case it's easy for the smartphone's camera lens to get broken. Plus, with some smartphones having sleek-but-slick-finishes, a grippy case can help keep you from dropping the phone in the first place. There are a few waterproof cases on the market for smartphones, but even most basic cases should buy you a few extra seconds to grab your phone out of the path of an expanding puddle of spilled beer (your friends are such lightweights).

So, do smartphone covers really protect phones from damage? To a degree, they do -- but you still need to be smart about how you take care of your phone. I recommend not using it anywhere near a toilet.

Before I had my daughter, I scoffed at parents who let their kids play with their smartphones. When my daughter started reaching for my iPhone at just three months old, however, I knew I was in for it. According to the smartphone damage survey, one in four parents has had their smartphone damaged by their kids. Though my kid doesn't play with my phone, she does grab for it while I'm using it, and the extra grip provided by my case helps me hang on to it. I've even seen specialty cases sold in the baby section of some big box stores to add extra kid-proof protection to smartphones and tablets. My little casemate iPhone case may not be able to stand up to the damage my kid is capable of handing out, but for now, I figure every little bit of protection helps.