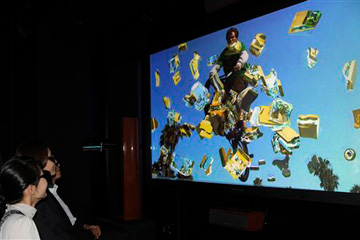 Have you ever used a notepad or flipbook to create simple animation? By drawing slightly different sketches on several sheets of paper and viewing them in rapid sequence, you create the illusion of movement. If you slow down the process, the animation becomes uneven and choppy. But if you move at a steady, rapid pace it can be very convincing. This illusion forms the basis for film.

The standard frame rate for film is 24 frames per second. That means every second of film you watch contains 24 separate pictures. As we mentioned earlier, standard interlaced televisions have a refresh rate of 60 hertz. In one second, the film will display 24 images, but an interlaced television set will refresh 30 times each for the odd and even lines of pixels. The difference between the film's frame rate and the television's refresh rate requires a special process called 3:2 pull-down to align the two rates. The process isn't perfect and as a result, film can look unnatural or jerky on television. Home theater enthusiasts call this effect film judder.

An HDTV with a 120 hertz or 240 hertz refresh rate is a different story. You can divide 24 frames evenly into either refresh rate. Because of this, your television doesn't need the 3:2 pull-down process to align the film's frame rate with the refresh rate. As a result, you get a smoother viewing experience while watching content originally captured on film.

Refresh rates are also important if you plan to watch 3-D content. A higher refresh rate allows the television to display the different sets of images necessary to create the illusion of depth. One method of showing 3-D content involves displaying alternating sets of images. A special pair of 3-D glasses synchronizes with the television set, allowing each eye to see only one set of images at a time. Your brain assembles the two sets of images into a single image that appears to have the dimension of depth. Several television sets on the market today are capable of using this 3-D technology.

When shopping for an LCD HDTV, keep an eye out for refresh rates. An HDTV from a trusted manufacturer should provide a smooth picture with a refresh rate of at least 120 hertz.

Learn more about high-definition television by following the links below.