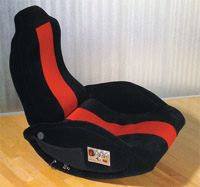 With built-in surround-sound speakers, amps and subwoofers, media chairs might be the next big thing in home theater systems. High-end models can include special transducers or gaming controllers, while others are simple seats with an amp and some speakers that you can get for around $100. Regardless of the features, all media chairs are designed to make gaming, watching TV and movies, and listening to music more enjoyable. If you're been thinking about a home theater system but don't have the space or money, a media chair might be right for you.

In this article, we'll find out what makes a chair a "media chair" and compare several models currently on the market.

Home Theater in a Chair

Media chairs, sometimes known as gaming chairs, aren't really a new technology -- they're just a new way to implement existing technology. But designing a media chair isn't as simple as taking a regular chair and attaching some speakers. Media chairs are designed from the ground up to incorporate the amp, speakers and wiring, keep the controls within easy reach and still give the user a comfortable place to sit.

At the most basic level, a media chair comprises the following components:

­ Some lower-priced media chairs aren't chairs at all. For example, the Pyramat Sound Lounger is a 64-inch long mat with a wedge-shaped pillow at one end, made from "high-density dual layer cushion." On the other end of the spectrum, the Spherex RX2 resembles an armchair and consists of a spruce plywood and hardwood frame, with steel springs supporting the cushion. High-density polyurethane foam makes the shape of the chair -- Spherex calls this material "acoustically transparent." The whole chair is covered with 100 percent polyester fabric. The HotSeat's Solo and Racer designs stand out the most. Designer Jay LeBoff wanted to create a gaming seat that felt more like a real race car for playing fast-paced racing games. The result is a racing seat mounted on a steel chassis.

Media chair speakers vary by placement and type. More expensive units have higher quality speakers, and chairs that feature surround sound will have an extra pair of speakers mounted somewhere in the front to give him the same type of experience that he would get from a home theater system. The rear speakers are placed in the back of the chair or embedded into the "shoulders" of the chair. In some models, the speakers are "satellites" placed on small arms that extend away from the body of the chair. The Pyramat is the odd one out -- the speakers are in the headrest, but they point away from the user. For surround sound chairs, the front speakers are placed either in the arms of the chair, or on small extensions, pointing toward the user. HotSeat chairs have front speakers mounted ahead of the user's feet.

The HotSeat Solo is mounted on a steel chassis, with speakers mounted on the frame behind the chair and in front of the user's feet.
Photo courtesy Hot Seat Chassis, Inc.

Subwoofers provide bass as well as tactile rumbling sensations, and are usually mounted beneath the seat of the chair. The Pyramat has a subwoofer mounted in the wedge-shaped head cushion, placing it directly behind the user's head. Basic chairs usually have a 5- to 5.5-inch subwoofer. A few chairs, such as the Ultimate Game Chair, include transducers or vibration motors that shake the chair. These units are wired to pick up on both movement and sound much like the "rumble" controllers that come with most gaming consoles.

The amplifier is a vital element of media chairs. The wattage determines the power that will drive the speakers, and the number of channels will determine the type of surround sound system in the chair. Lower-end models have weaker amplifiers and only stereo sound, while the RX2 has a 300-watt, six-channel amp, and the Powerplay 5.1 Pro Media Chair boasts a 505-watt, six-channel amp.

Another important feature to consider is the audio inputs that the chair will accept. The Powerplay 5.1 Pro Media Chair has two digital and four analog inputs, allowing it to connect to a TV, CD player, computer or any gaming console. The Sound Rocker accepts component audio inputs, which allows connection to game consoles, TVs and DVD players, but not high-end digital audio. It also has a 1/8-inch input, so you can plug in an MP3 player or anything else with a headphone jack. Other chairs have some combination of those input options.

Next, we'll look at the pros and cons of media chairs.

Pros and Cons of Media Chairs 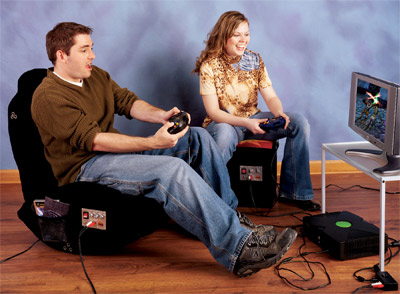 You can daisy chain Boom Chair products, like the Boom Chair 2.0 and the Boom Cube.
Photo courtesy Lumisource

If you're thinking of installing a home theater system and wondering if a media chair would be a better way to go, it depends on the room and how many people will be using it. You can daisy chain some media chair models, but that's probably not the best idea if you want your family to enjoy a home theater system. If you're the only one who will be watching movies or playing games, then a media chair offers a nice compact system. Only higher-end chairs will give you surround sound.

What do media chairs have going for them? Any kind of audio installation has a "sweet spot" in the room where all the channels are balanced properly. A media chair focuses the sweet spot right where you're sitting. In addition, media chairs provide tactile feedback, either because the user is sitting on a subwoofer or because the chair actually shakes and vibrates. Few home theater systems come with "rumble sofas."

Lower-end media chairs can be ideal for smaller rooms, such as dorm rooms or children's rooms. They provide a compact listening space for one person without a bunch of stereo equipment. Another advantage of low-cost media chairs that only provide stereo sound: If you have a system that allows you to set up which audio feeds run to different speakers, you can make the chair's speakers the "rear" set, with the "front" sound coming from the TV or another set of speakers. This gives you a low-budget version of surround sound.

In the next section, we'll compare some of the media chairs on the market to help you decide which one is right for you. 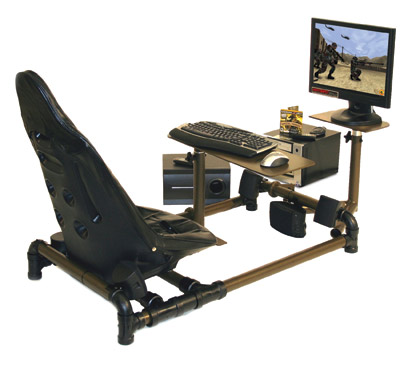 When it comes to choosing one media chair over another, there are three main criteria:

If you just want stereo sound, you're in luck. Stereo sound can be found on the lower-priced systems like the Boom Chair, the Pyramat and the Sound Rocker. One mid-price system, the Ultimate Game Chair, also comes with stereo sound. If you're looking for a surround sound experience, you will have to pay more. The least-expensive chair that includes surround sound is the HotSeat Solo.

Next, you need to decide how you will be using your media chair most of the time. If it will be mainly used as a gaming chair, and you just want the subwoofer to give you some rumbling, then low-cost chairs like the Sound Rocker or Boom Chair will serve your purpose. For gamers with more ambitious plans, HotSeat offers several different options. The HotSeat Racer, which includes mounts for pedals and a steering wheel, is perfect for racing game players. Their most expensive option is the HotSeat PC Gamer, which includes mounted tables for a keyboard and monitor. All HotSeat chairs include surround sound.

Gamers who want some serious rumble will want to check out the Ultimate Game Chair, which features 14 "vibration motors" to shake and rattle in time with explosions, gun shots and tackles. Someone looking for a movie theater experience will want a chair that can accept digital inputs for use with high-end audio/visual devices. Surround sound is needed for this kind of setup as well. Both the Spherex RX2 and the Powerplay 5.1 Pro Media Chair offer these features. The Pro Media Chair incorporates the ButtKicker, a "silent subwoofer" designed to let you feel the vibration. You can also purchase ButtKickers by themselves.

You can place the ButtKicker under any chair if you just want to add vibrations to your gaming experience.

For most buyers, the biggest factor in choosing a media chair is price. Pyramats sell for as little as $90, while Spherex RX2 chairs can go for $1,600. Your budget will determine where you fall within that range. In the media chair market, brand names don't mean too much, so higher prices generally reflect better components, more features and better audio equipment.

For lots more information on media chairs, check out the links on the next page.