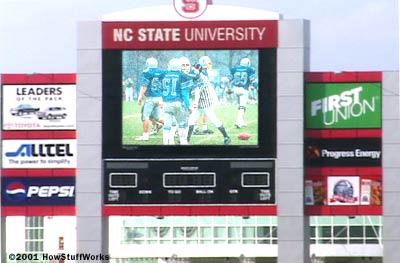 Jumbo screens like this one are widely used in sports arenas.

­If you have ever been to a sporting event that has a large-screen TV in the stadium, then you have witnessed the gigantic and amazing displays that make the games so much easier to follow. On the TV, they can display instant replays, close-ups and player profiles. You also see these large-screen TVs at race tracks, concerts and in large public areas like Times Square in New York City.

Have you ever wondered how they can create a television that is 30 or 60 feet (10 to 20 meters) high? In this article, we will take a look at the LED technology that makes these huge displays possible!

A jumbo TV that is 60 feet (20 meters) high has to do the same thing that a normal television set does -- it has to take a video signal and convert it into points of light. If you have read How Television Works, then you know how a television that uses a cathode ray tube (CRT) does this. Here is a quick summary of how a black-and-white TV works:

[A color screen does the same thing, but uses 3 separate electron beams and 3 dots of phosphor (red, green and blue) for each pixel on the screen. A separate color signal indicates the color of each pixel as the electron beam moves across the display.]

CRT technology works great indoors, but as soon as you put a CRT-based TV set outside in bright sunlight, you cannot see the display anymore. The phosphor on the CRT simply is not bright enough to compete with sunlight. Also, CRT displays are limited to about a 36-inch screen. You need a different technology to create a large, outdoor screen that is bright enough to compete with sunlight. 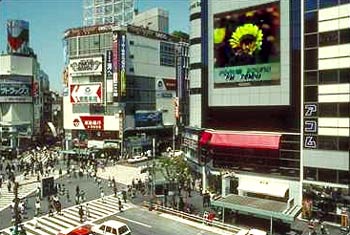 There are two big differences between a jumbo TV screen that you see at a stadium and the TV in your home:

To accomplish these feats, almost all large-screen outdoor displays use light emitting diodes (LEDs) to create the image.

LEDs are, essentially, little colored light bulbs. Modern LEDs are small, extremely bright and use relatively little power for the light that they produce. Other places you now see LEDs used outdoors are on traffic lights and automobile brake lights.

On a color CRT television set, all of the colors are produced using red, green and blue phosphor dots for each pixel on the screen:

In a jumbo TV, red, green and blue LEDs are used instead of phosphor. A "pixel" on a jumbo TV is a small module that can have as few as three or four LEDs in it (one red, one green and one blue). In the biggest jumbo TVs, each pixel module could have dozens of LEDs. Pixel modules typically range from 4 mm to 4 cm (about 0.2 to 1.5 inches) in size.

To build a jumbo TV, you take thousands of these LED modules and arrange them in a rectangular grid. For example, the grid might contain 640 by 480 LED modules, or 307,200 modules. The size of the ultimate screen depends on the size of the LED modules:

To control a huge LED screen like this, you use a computer system, a power control system and a lot of wiring.

For more information on LED screens and related topics, check out the links on the next page.