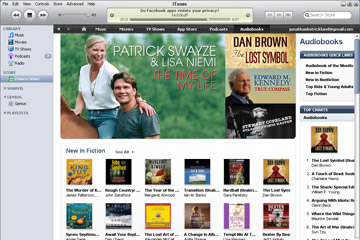 The iTunes store contains a large library of audio books.
Screenshot by HowStuffWorks.com

FairPlay was an Apple-proprietary encryption scheme that determined what users could do with a file once they downloaded it. FairPlay let you:

­To authorize a computer, all you had to do was to try to play a protected song on it. When you did, the computer generated a unique ID and sent it to the iTunes server, requesting authorization. If there were fewer than five authorizations on your account, the server added this unique ID to your account and sent back a decryption key to store on the computer. The key itself was encrypted so you couldn't just send it to someone else to use. This computer was then authorized to play FairPlay-protected songs registered to that account. The next time you clicked on a protected song, the iTunes software used the computer's authorized ID to decrypt the key and then used the key to decrypt the song. Newer tracks on the iTunes Store are free of FairPlay encryption, but the technology still works if you attempt to play an older encrypted track.

Most of the controversy surrounding FairPlay was about Apple's refusal to license it, not about the limitations it imposed -- as far as DRM schemes go, FairPlay wasn't overly restrictive. But since Apple didn't license FairPlay to anyone, you could only play a protected file using iTunes software, and you could only take it with you on an iPod, iPhone or an iTunes phone. By keeping FairPlay in-house, Apple effectively created a dependence loop between iTunes and iPod that some went so far as to call a monopoly on digital entertainment. In January 2005, one person filed a class-action lawsuit against Apple to this effect, claiming the company is violating federal anti-trust laws.

The other problem with FairPlay was that it created a Linux shut-out. Since protected songs will only play on iTunes, and iTunes is only compatible with Mac OS X and Windows XP or later, people who use the Linux operating system without running a virtual Windows machine can't buy content at the iTunes Store (actually, they can buy it -- they just can't play it). This led to an ongoing war between Linux hackers and Apple. The most famous example of this battle is the back-and-forth between a team of hackers led by "DVD Jon" Johansen (who cracked the DeCSS encryption on protected DVDs in 2002) and Apple programmers [source: Borland].

In January 2004, Johansen published a piece of code that disabled Apple's DRM scheme on the user end, allowing people to play FairPlay-protected files on a Linux machine. In March 2005, Johansen released a piece of software that disabled FairPlay on the Apple end, creating a glitch in the download process that stopped the encryption from being applied to a file. Just days later, Apple released a new version of the iTunes software that disabled this glitch. One day later, Johansen released another piece of code that recreated the glitch. And from there it went on in much the same vein.