How the iPod touch Works 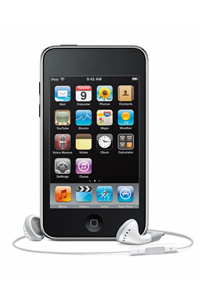 When Apple released the iPod video in 2005, people started wondering what the next version of the iPod would look like. It seemed obvious that the media player needed a bigger screen. While a 2.5-inch LCD was fine for browsing through lists of artists and songs, it was far too small for watching videos, especially in a widescreen format.

Apple released the first version of its iPod touch in 2007. Since its release, the iPod touch has become a popular portable media player. Its sibling iPod models specialize in audio and video playback, which is great if that's all you need. The iPod touch goes beyond that, including two cameras, wireless networking, built-in applications for e-mail and Web browsing and the option to install many of the thousands of applications available through the App Store.

The iPod touch display screen covers most of the front surface of the iPod touch, making it resemble an iPhone. It also uses the same multi-touch interface that the iPhone uses instead of the click-wheel design on some other iPods. You wake up the iPod touch with a simple press of its home button, and then navigate through music, videos and other files using your fingers and the touch-sensitive screen.

The iPod touch might sound like the perfect blend of features from the original iPod and the iPhone; however, the iPod touch isn't for everyone. In this article, we'll look at how the iPod touch measures up to the iPhone and other iPod models. We'll also examine the technology behind the multi-touch interface and the media player's technical specifications. 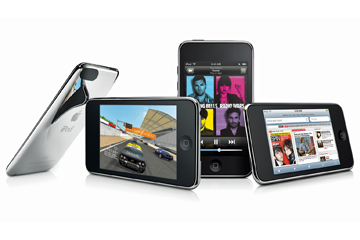 The iPod touch bears a striking resemblance to the iPhone and can run many of its applications as well.
Photo courtesy Apple

The iPod touch's home screen also looks like the iPhone's, but with fewer icons -- at least, until you start installing new applications. From the home screen, you can get to the iPhone's text-messaging capabilities and collection of mini-applications called widgets. And, of course, you can also use the iPhone as a cellular phone. The iPod touch doesn't share any of these features, but the two devices do have a few things in common, including:

The iPod touch also costs roughly the same amount as an iPhone or an iPod classic, but each of these devices has significantly different features and capabilities. Here's a run-down of the costs:

In terms of storage space, the iPod touch is comparable to the iPhone and the iPod nano, although it also comes in a 64 GB model. The iPod touch also has far less storage space than the iPod classic, but their prices fall into a similar range. So when you buy an iPod touch, you won't necessarily get more storage room than on other iPod models. Instead, you'll get WiFi capabilities plus the large touch-sensitive screen and application interface of the iPhone.

­Next, we'll take a look at exactly what's behind the iPod touch's most distinctive feature.

The basic process behind detecting touch

The thing that sets the iPod touch apart from other iPod models -- other than the latest nano -- is its touch-screen interface. When you touch the screen, the iPod's circuitry detects the presence of your finger. It keeps track of how many fingers you have on the screen and where you move them. It also gives the iPod touch the capability of running apps -- something even the newest iPod nano can't do.

The iPod touch does this using a layer of capacitive material under a protective covering. You can read How Capacitors Work to learn more about them, but the basic idea involves taking advantage of the electrical properties of the human body. When you touch a capacitive surface, the amount of charge it holds changes. This is why devices like the iPod touch require you to touch them with your bare skin -- insulating materials like gloves, pens and styluses don't cause the same changes in the capacitive circuitry.

There are two possible methods the iPod touch can use to measure changes in electrical states:

Sensing circuitry in a self-capacitance screen measures changes in electrical charges.
In mutual capacitance, a grid of driving lines and grid of sensing lines work together to detect electrical changes.

Regardless of which method the screen uses, you change the electrical properties of the screen every time you touch it. The iPod records this change as data, and it uses mathematical algorithms to translate the data into an understanding of where your fingers are. In the next section, we'll explore what the iPod touch does with this data and how to navigate through its features.

Figuring out your touch input requires the cooperation of the iPod touch's processor, operating system, hardware and software.

Here's an example. If you're using the Safari Web browser and you want to type in a URL, you touch the URL field in the browser. The capacitive layer detects your touch on the screen, and the processor and gesture software cross-reference the touch data with the application in use. The processor relays a message to the iPod touch's screen, telling it to display an image of a keyboard. The screen then detects the location of each virtual key you touch, and the screen displays the corresponding letter in the URL field. Each time you touch the screen, the process of determining what you're touching and why happens in the background, almost instantaneously.

The gestures themselves are fairly intuitive. To turn the iPod touch on, you press the home or sleep/wake button, then move your finger across the slider that appears on the screen. To press on-screen buttons, you simply touch them. You can scroll through lists of files by sweeping your finger up and down the screen. If you turn the iPod touch horizontally, you can browse music through CoverFlow, an animated display of your music's cover art. As with the iPhone, you can zoom in to pictures and Web pages by using two fingers and spreading them apart, as if stretching to make the picture bigger. To zoom out again, pinch your fingers together, as if trying to shrink the picture.

The latest iPod touch models have two cameras, one on the front and one on the back. They can make Facetime video calls to other current iPod touch devices, iPhone 4 handsets and Macintosh computers running Mac OS X 10.6.4 or later. The camera also gives you the chance to capture and edit HD video using your iPod touch. The mp3 player now has a retina display with four times more pixels on the screen than previous iPod touch models [source: Apple].

The iPod touch grew in popularity in its first three years, and it came close to outselling the iPhone in late 2009. The Apple iPad, introduced in early 2010, does most everything the iPod touch can do, but on a larger device with more features. Besides being able to run almost all the App Store apps, the iPad has special iBooks software so it can be an e-reader (like the Amazon Kindle). It also has an optional keyboard dock with a full-size keyboard. With the new features comes a much higher price: The iPad starts at $499 for a 16 GB model with WiFi, and the prices go as high as $829 for a 64 GB model with both WiFi and 3G. Time will tell whether the iPod touch can keep up its popularity as its bigger sibling hits the market.

To learn more about iPods, iPhones, MP3 players and related topics, visit the links on the next page.

Some Linux users have found ways to synch their computers with the iPod touch, but the synch features are limited compared to Apple's supported iTunes software.

How Walkie-talkies Work
They're Killing the MP3, but That's OK
How MP3 Players Work