How could an iPhone tell it's being stolen? 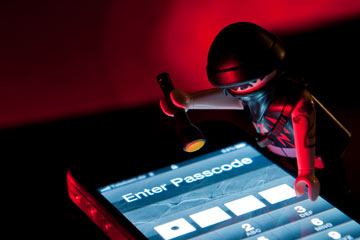 While an accelerometer-based theft deterrent is not yet available to consumers, Apple has filed a patent application for the technology. See more iPhone Pictures.
seewhatmitchsee/©iStockphotos.com

Thefts of hand-held devices are on the rise; robberies involving portable Apple devices increased by 40 percent in New York City alone from 2011 to 2012, and there were 11,447 reported thefts of Apple devices in between Jan. 1-Sept. 23, 2012 -- that means more than 14 percent of all the major crimes committed in the city during that time frame were iCrimes [source: Cambell]. Of course, it's not just a problem in New York City.

One of the best ways to secure your device from being stolen is to lock it down, and for many years, that meant physically tethering that device to a fixed object with a lock and cable. But while that may be OK for a computer, it's just not practical for a smartphone. Today, iPhone users might be familiar with Find My iPhone, a free lost-and-found service Apple provides through iCloud.com, allowing owners to locate their device on a map, lock it down and even wipe it clean if needed. But times are again changing, and in November 2012, Apple filed a U.S. patent application for an accelerometer-based theft detection system for portable electronic devices -- think of this as a car alarm for your iPhone.

Accelerometers measure motion, the increase in the rate or speed something is moving. You use accelerometers all the time, although you probably haven't thought about it. In Nintendo's Wii Remote controllers, accelerometers detect the motion of, say, your golf swing; they detect the increase in speed when your laptop gets knocked off the desk (that's the free-fall sensor); and they're also used to detect if your car has crashed and the airbag system should deploy.

iPhones, iPads and other iDevices have built-in accelerometers, too, and here they're used to detect things such as when you're turning or moving your device -- smartphones, tablets, e-readers and your digital camera all rely on acceleration sensors to adjust the screen orientation between landscape and portrait as needed, and many games make use of accelerometers as part of the play experience.

But that acceleration sensor in the iPhone could get additional job duties. Let's talk about how the iPhone's accelerometer could clue a smartphone in to its own theft.

Accelerators measure motion over time, and this is key to how the Apple anti-theft idea works. It all begins with an acceleration sensor (which could be one or a group of accelerometers and the software required to make them work) continually monitoring the acceleration (motion over time) of your iPhone. Think of this as your phone getting to know you and how delicate or rough you are with it, the baseline acceleration signal for your phone.

That stream of data is filtered and compared to a series of characteristics known to happen in situations when theft is occurring; Apple has figured out that when a device is being stolen the data collected by the accelerometer -- the acceleration signal -- looks different than during those instances when the device is been dropped or during other types of everyday impact and usage. Apple calls these scenarios theft conditions, and there are filters designed to distinguish those frequency types and lengths from those in your baseline. For example, while you might like to run with your iPhone, characteristics of a theft condition might include frequencies that indicate running in addition to abrupt changes in direction or jumping movements.

Theft conditions are basic rules for when an alarm should sound (when someone snatches your phone and runs) or not (when your phone is jostled in your pocket). If the data matches characteristics of a theft condition, a signal is sent to the phone's microprocessor -- and that's the message the microprocessor needs to trigger the alarm to sound through the speakers.

While some may prefer to stick with the default settings, Apple's anti-theft device would allow users to edit their theft detection profile (as well as turn it on or off) through a user interface in their phone settings, including whether or not an alarm should sound during a theft, how loud the alarm should sound and also whether or not a message should appear on the device screen (and what that message should read). Users would also set a password to disable the alarm, as well as calibrate the sensitivity of their iPhone's theft detection system.

Despite how smart your phone may be, if it's slyly pocketed while your attention is diverted, don't rely on an alarm to sound. Chances are low it would be able to discern that kind of device-in-pocket motion as anyone other than you.

If you often have your iPhone on your desk while you work, you may want to rethink that; your pocket may be safer, and not because someone could swipe it from the tabletop when you're distracted. As it turns out, the acceleration sensor in your phone may be able to help someone steal your password through the vibrations it detects as you type on your keyboard. Programs are able to translate those vibrations into readable words and sentences with more accuracy than you might imagine -- up to 80 percent [source: Wired].

The first thing I thought of when I read through this patent application was, is Apple building the car-alarm equivalent for iPhones? And then I thought of how a good hail storm can set off a car alarm. What would the sensitivity of the iPhone alarm be, and how many people would be running to meetings with iPhone alarms sounding from their pockets as they go? While the technology doesn't yet exist (this patent was filed after the iPhone 5 was released), rest easily -- if this accelerometer-based theft device comes to pass, it sounds like there will be plenty of ways to adjust its sensitivity, or, just turn it off.

How to Fake a GPS Location on Your Phone
How 5G Works
Why am I not allowed to use my cell phone in airplanes or hospitals?