How close are we to holographic gaming?

Browse the article How close are we to holographic gaming? 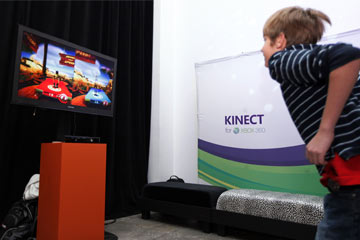 While the Microsoft Kinect offers three-dimensional game play movement, it doesn't project imagery out to the player's environment.
© WireImage/Getty Images

Starships! Warp drive! Teleportation! "Star Trek" has given real scientists more futuristic technologies to strive for than any other piece of science fiction, but there's one that perfectly embodies the anything-is-possible optimism of the franchise's technology. The holodeck, introduced in "Star Trek: The Next Generation," is the ultimate tool for experiencing any time and place with utter realism and immersion. The holodeck represents the movies and literature brought to life, and ever since "Star Trek" writers dreamed it up, we've been pining for virtual reality technology to catch up with the 24th century.

We're not quite there yet -- no surprise, right? On the bright side, virtual reality has come a long, long way since early efforts in the 1980s. Back then, computers and video game consoles were barely powerful enough to create crude 3-D graphics. We wanted video games to be like Flynn's experience inside "Tron," but we never quite got there. The holodeck gave us an even loftier goal to shoot for, and video games have been key in pushing graphics technology forward for the past three decades. Today, we've got 3-D TVs and Microsoft's Kinect, which uses a depth sensor to pick up gamers' movements.

Could holograms be just around the corner?

Well, not quite. While Kinect uses some pretty amazing technology that's bound to get even better in the future, that technology has nothing to do with actually projecting images. 3-D televisions haven't become the next big thing like TV manufacturers hoped, making the much more complex prospect of a holographic television unlikely.

But don't give up on the holodeck dream just yet. Even if cool holographic games are years and years away, some of today's patents and technologies prove that we're headed in the right direction. With luck, we may even get there before the 24th century.

Holographic technology is exciting for a simple reason: Immersion. The best films and video games can draw us into their worlds through compelling characters and images, but a two-dimensional screen is always a limitation. Virtual reality technology accomplishes the same goal as a hologram, but with a head-mounted display (HMD) instead of projected three-dimensional images. But HMDs aren't easy to build, either, which is why the video game industry rallied around the Oculus Rift in summer 2012.

Two things separate Oculus Rift from other head-mounted displays. Most importantly, price. While professional HMDs can cost in the hundreds of thousands of dollars, the first version of Oculus Rift (designed for developers) costs only $300 [source: Kickstarter]. Second: Oculus Rift's specifications blow away many of the HMDs that have failed before it, thanks to a low input delay and wide field of view. For example, its 90 degree horizontal field of view far exceeds the 45 degrees of the Sony HMZ-T1, released in 2011 [source: Sony].

The HMD works in the same way as a 3DTV, delivering stereoscopic 3-D images to each eye to give the brain a sense of depth. The difference is the addition of head tracking, which allows gamers to move their eyes and "look" around a virtual world that surrounds their field of view.

Oculus Rift picked up nearly $2.5 million in Kickstarter funding in August 2012, as developers and gamers contributed to the project and pre-ordered their own dev kits. A consumer-oriented follow-up is planned for 2013. Unfortunately, we're not as close to a hologram breakthrough. 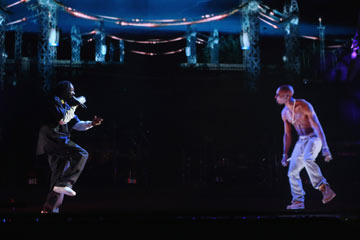 Stereoscopic 3-D creates depth in an image by presenting two different perspectives to the brain. Each eye sees an object from slightly different angles, creating a 3-D effect. While some movies are digitally converted to 3-D, they're ideally filmed from two different perspectives to create a true 3-D effect. Similarly, game developers working in 3-D have to deliver different images to each eye, which is much more taxing for video game consoles and computers. The solution, so far, has been to lower the resolution of the image delivered to each eye.

So what does this have to do with holograms? Well, think of it this way: If game developers are already struggling to deliver 3-D images to each eye and keep visual quality high, how much more difficult will it be to project images, aka holograms, into the environment surrounding gamers? Making movies in three full dimensions, rather than the two separate angles required for stereoscopic 3-D, would be an even greater challenge for moviemakers.

Another problem: For holograms to become a reality, people need to own the hardware to support them. While 3DTV sales are slowly rising, TV sales in general shrank in 2012 [source: BGR]. 3-D hasn't proven to be a huge seller for the industry because it's more expensive, and some people don't care about watching movies or gaming in 3-D at all. So how many people will truly be interested in buying holographic technology?

Well, 3-D has been around in some form for decades. Though today's 3-D technology is better than ever, it's still not revolutionary or exciting. But we'd all love to experience the holodeck, which is why some big companies -- including Microsoft and Apple -- have patented some cool holographic concepts.

A Microsoft patent published in September 2012 describes an "immersive display experience" which outputs an image to a primary display (think your TV) and also "outputs a peripheral image to an environmental display for projection by the environmental display on an environmental surface of a display environment so that the peripheral image appears as an extension of the primary image" [source: Patentdocs]. In other words, a projection device would cast images to either side of your TV, essentially surrounding you with the digital world you're interacting with. Like Microsoft's Kinect, the patent uses a depth camera to track the user and objects in the room.

Video game development engine Unity has partnered with a company called Infinite Z to integrate holographic support into its toolset. Infinite Z's zSpace technology uses head tracking, passive 3-D glasses and infrared technology to create 3-D images right in front of your face, as long as you have a special monitor [source: Co.Design]

Apple's patent for a 3-D system, meanwhile, has less to do with games and more to do with general computer interaction. But once we're moving our hands in 3-D space to carry out virtual functions, it's only a matter of time until games are involved.

But do patents really tell us anything? Companies like Apple and Microsoft patent their research all the time without turning those ideas into real products. Odds are that we'll never see these patents turned into real products, but one day the research that went into them could give us real holographic technology. For now, virtual reality games are much closer to reality.

Oh, if only holograms were real. I wish holograms were around the corner, but the truth is that gamers will be making do with their TVs for a long time to come. I had fun looking through some of the most promising holographic patents out there, but even if the technology was for sale right now (and it's not) it would still be tough to market to gamers at a reasonable price. But I'm extremely excited about Oculus Rift -- I think head-mounted displays may end up being more immersive than holograms, anyway -- and so far, the technology looks like it has a ton of potential. If enough game developers support it, this could be the tech that justifies 3-D.