The Death of HD-DVD 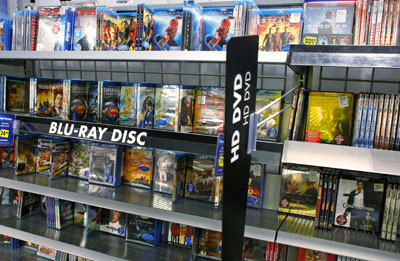 The fall of the HD-DVD format means that retail chains like Best Buy no longer need to have two separate sections for high-definition media.
Justin Sullivan/Getty Images

Blu-ray and HD-DVD had gone to war, and companies began to side with one format or the other. A few movie studios hedged their bets and produced content for both formats. But that wasn't very efficient or cost-effective. Retail stores faced a similar dilemma: should they dedicate vthe aluable floor space to both HD-DVD and Blu-ray? And if one failed, what would happen to the other? Many people agreed that it would be better for the industry to settle on one format.

By the summer of 2007, Blu-ray was doing very well. While dedicated Blu-ray player sales weren't very high, Sony's inclusion of a Blu-ray player in the PS3 helped promote the format. According to a report by Home Media Research, Blu-ray discs outsold HD-DVDs by a factor of two to one in the first half of 2007 [source: Reuters]. But HD-DVD wasn't ready to throw in the towel just yet. Despite the widening gap, studios like Paramount and Dreamworks announced that they would produce content exclusively for the HD-DVD format (although Steven Spielberg's Paramount films still found their way to Blu-ray) [source: Barnes].

Blu-ray achieved another victory that summer when Blockbuster Video stores switched exclusively to the Blu-ray format for its high-definition movie selection [source: Rusli]. And HD-DVD suffered yet another setback when the retail outlet Target announced it would stop carrying the HD-DVD players and only reserve space for Blu-ray machines [source: Ault]. After each announcement, a few bloggers and tech reporters pronounced the HD-DVD format officially dead. Yet HD-DVD backers continued to fight.

Professional reporters and amateur bloggers alike began to predict a format war that would stretch well into 2009 [source: Bangeman]. Companies that had hoped to build players that could handle both formats abandoned those plans. While the prognosis for HD-DVDs was grim, Toshiba's HD-DVD players were still less expensive than dedicated Blu-ray machines. The lower price gave HD-DVD supporters hope that they backed the right high-definition horse.

­But suddenly there was a shift to Blu-ray. More studios began to defect to Sony's format. By January of 2008, the end was near: Warner Bros. announced it was switching exclusively to Blu-ray. By that time, HD-DVD only had two studios backing its format: Universal and Paramount. To make matters worse, Universal's exclusivity agreement had just expired and Paramount had an escape clause. Paramount's agreement stated that if Warner Bros. jumped to Blu-ray, Paramount could follow suit [source: Fritz, Garrett].

But the tech world really knew HD-DVD was in trouble when Toshiba canceled all HD-DVD press conferences and events at the 2008 Consumer Electronics Show. HD-DVD still had a presence on the showroom floor, but Blu-ray's booth outshone its rival. The HD-DVD booth was shaped like a large square -- the Blu-ray booth took on the shape of a ghostly pirate ship. The writing was definitely on the wall.

A short time later, retail giant Wal-Mart announced it would only offer Blu-ray movies and electronics in its stores. Toshiba officially conceded the format war to Blu-ray in February 2008. The company announced it would stop manufacturing HD-DVD players by that March [source: Negishi, Hamada].

That wraps up the story on HD-DVD -- for now. To learn more about high definition video, tune in to the links below.

I'm Not Dead Yet

The HD-DVD format may not be as dead as we thought. In China, manufacturers are throwing support behind CH-DVD, an offshoot of the HD-DVD format [source: Wong]. Will China's support resuscitate the format and reignite the war with Blu-ray?