The Bottom of This 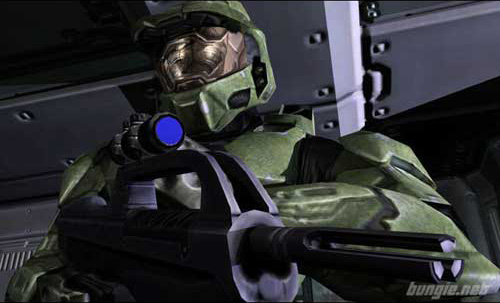 Is this rifle better?
Photo courtesy of Bungie.net

It occurred to me suddenly, I know the answer to this question. I remembered having a conversation with someone at Bungie Studios about this. It was during my visit, before Halo 2 came out. I dug through my old notes and found the transcript of an interview I had done that day. And there, right on one of the dog-eared, yellowing pages, was the answer.

Allow me to paint a picture:

Set the way, way back machine for November 3, 2004. It was a special time. There was a certain electricity in the air. Phil Vassar's "In a Real Love" moved up the Billboard Country Charts from No. 3 to its rightful spot at numero uno. Animal print was all the rage among the high fashion set and one day after National Voting Day (which only four years earlier was known to America as Election Day), the U.S. anxiously waited to hear the ballot results from Ohio, New Mexico and Iowa.

Much like Dorothy in Oz, I saw many mind-boggling things the day that I went to visit Bungie Studios. I also met many fascinating people. One such encounter was with one of the very pillars of Bungie Studios --- Lead Game Designer Jaime Griesemer.

Jamie and I talked about many things that day. At a certain point we discussed how decisions were made regarding what changes and what stays the same when you are trying to create the sequel to one of the most successful games of all time. Jamie explained the decision-making process, detailed how they decided whether or not something worked and gave examples of some changes that were made in Halo 2. Later, he mentioned a change that Bungie had made to the Chief's standard arsenal.

At the time, what he said seemed exciting but I didn't realize that what he was saying would be the central issue of such a hot topic for Halo fans worldwide. Here Jamie talks about the decision to make changes to the pistol and the assault rifle in Halo for Halo 2:

"...in Halo 1 we had the assault rifle which was just a bullet hose and the pistol which was very accurate and did lots of damage in head shots. Around the office everybody uses the pistol because, especially in single player, it's really easy to kill the little grunt guys, and it's much more accurate in multiplayer.

"When we looked at what we wanted to do with the weapons in Halo 2, the first thing that we wanted to do was we wanted to make it so that the pistol was a lot more appealing to people. So we made it (the pistol) into the powerful looking battle rifle. Then we wanted to make the assault rifle more into a support weapon that people would use sometimes in the right situations when they need a bullet hose. We made that (the assault rifle) into the SMG. So really, the Halo 1 assault rifle and the Halo 1 pistol, we just used the exact same tags and data. We just changed the models and the sound, so people would want to use the one that we wanted them to use more... we literally just changed the models on the old tags."