You would have thought that the very secret of life itself had come in the mail when I screamed around the corner of the office with the package in my hand. Inside was our advance copy of "Halo 2." Yes, my job rules. All cubicles were abandoned and everybody gathered around to watch me play "Halo 2" for my first hour review.

The box is beautiful. Bungie sent me the regular edition that shows MC crouched on the rubble of a burning Earth. I leafed through the instructions that set the story by relaying excerpts from Cortana's reports. The following pages show new weapons and new baddies, but, as we all well know, there's going to be way more than what they show. I popped the disc in and began. My hour starts.

Like an old friend you haven't seen in years, the second "Halo" looks familiar but is different enough to make you excited for your reunion. This starts right at the menu screens. The interface for creating a new character is different. It offers much more customizable armor. You can also choose to be a Covenant Elite (for multiplayer). After opting for a grey and tan color scheme and picking the 7th Column emblem (heck yeah!), it was on.

The Stage is Set 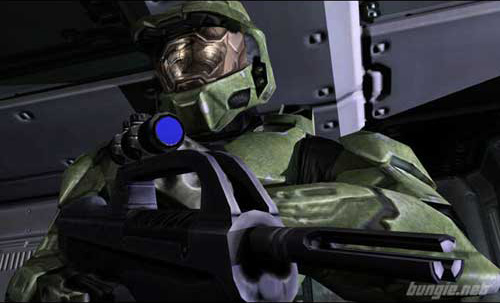 The second act of the Halo saga picks up right where the first one ends -- in a scattered debris field left by the destruction of the Halo. There are big things afoot, as we witness the trial of the Covenant fleet commander responsible for the Covenant's failure at Halo.

After the cutscene, you start in the armory of the Cairo Orbital defense platform. This whole sequence is just like Halo 1. Look at the lights, charge your shield, and some witty NPC banter. Here's your first chance to move the Chief. It's like putting on an old jacket -- it feels good to be back. Take a minute to move around the armory, and you'll quickly discover something new in "Halo 2": interactive environments. Cans, chairs and other objects can be moved around or knocked over much to the chagrin of the gunnery sergeant.

After a brief walk with Sgt. Johnson, another cutscene begins and the Chief attends a meeting of the Navy Brass. In a great cinematic cut scene, the story moves forward along two lines: the awards ceremony of Master Chief and the punishment of the Covenant fleet commander. The party is short, as the newly coifed Cortana picks up Covenant attack forces on her sensors. The Covenant is at our doorstep!

The action starts quickly, as Master Chief sets out to repel boarders attacking one of the orbital defense platforms protecting Earth. The first level is highly reminiscent of the Pillar of Autumn board from the first game. Familiar warning claxons and commands are issued over the PA. This is a nice touch as it eases the player into what is very quickly going to become a different Halo than you are used to. The Chief and the Marines battle back a sub-par Covenant attack force. This gives you the chance to figure out some of your new digs.

Dual wielding immediately comes into play. This is a great new feature that feels very intuitive. To dual wield, you stand over a one handed weapon and press the Y button. Once you are armed the right trigger fires the gun in your right hand, left trigger for the left hand. You drop the second weapon by pressing Y. The only problem I have is wanting to throw a grenade and forgetting I have to drop my second weapon to do it. This is something that will take a minute to get used to.

Chief's standard issue weaponry has also changed. The pistol and Assault Rifle have been replaced by the Battle Rifle and SMG. For me, the battle rifle was love at first sight. It has a scope like the pistol but fires accurate three round bursts. The SMG seems like a much more controllable version of the assault rifle.

The graphics and sounds are great. Everything is far more detailed in Halo 2. There are reflections, detailed textures and smooth animations. Even the flashlight casts a far more realistic field of light over dynamic surfaces.

The level plays out much like would expect ... up to a point. Eventually, you find yourself squaring off against a new foe: The Drones. These jerks are like flying Elites. It is easy to see that they are going to quickly become my new object of hatred in the Halo universe.

Even in the first level, it is apparent that boards are a lot less linear than they were in the original. There are several paths through each area and some loop back on themselves. While this felt a little confusing at first, it will eventually amount to several ways to skin a cat when fighting the Covenant on harder difficulty settings.

I made it through the first level without a problem. After another cutscene, I was on Earth and it was time for street-to-street urban combat in a desert city (hmmmm....). The game abruptly leaps into high gear. The Marines and I fought off one ambush after another. My ever-changing audience oohed and aahhed with each new wave of attacks. We all noticed more and more little details as I played through. My run and my hour ended with two Hunters smashing the crap out of me. Boy, oh boy is this game ridiculously cool.

How are video games regulated in the U.S.?
The 10 Best U.S. Cities for Gamers
What are the best video games that were never made?