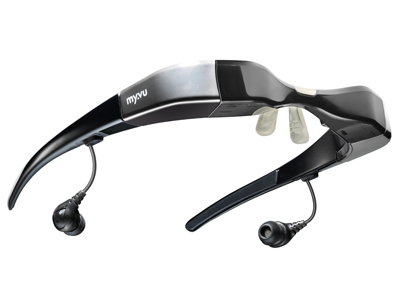 ­As travel gadgets become increasingly portable and versatile, they also get more personal. Our cell phones, iPods and BlackBerry devices are like portals into our own private worlds of music, photo collections and e-mail accounts. When we use them, we usually forget about the surrounding world. But for those who covet privacy and seek personal refuge, these gadgets might not be enough. The people around you can still hear half of your cell phone conversation, and can you really trust the guy sitting beside you in the crowded airport terminal not to peek at your e-mails?

Short of finding a secluded corner or speaking in a whisper, there's another way to escape into your own world while you travel. Some developers have come out with video glasses that allow you to watch videos anywhere you go. Although they take advantage of the same principles of binocular vision (which we'll learn about later), these cutting-edge movie glasses aren't like the old, handheld View-Masters of your childhood. These video glasses offer hands-free convenience as well as a big-screen experience.

Video glasses aren't a new idea in the high-tech world, in which they've been known as a kind of head-mounted display (HMD). They're also called personal media viewers. No matter what you prefer to dub them, you can't deny that HMD technology has improved tremendously in the past couple decades. When first widely introduced to the market in the 1990s, consumers were underwhelmed with the results [source: Lubell]. In the form of bulky, ridiculous-looking helmets, such impractical novelty gadgets failed to entice buyers.

Today, they might be ready for a comeback. Modern video glasses usually take the form of relatively lightweight glasses. At first glance, some versions look like an average pair of sunglasses. Others have a more futuristic appearance that reminds many of the iconic eye-visor donned by the "Star Trek" character Geordi La Forge.

They all perform the same basic function, however. Next, we'll take a look at how these glasses display images. 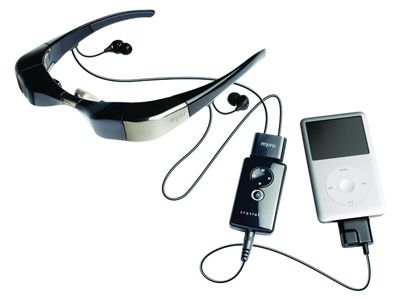 Many video glasses are portable and connect to video iPods.
Image courtesy Myvu

­How do these gadgets give you the illusion of sitting in front of a big-screen television? The patents filed for a few of these cutting-edge video glasses offer us some helpful insight.

The displays typically use liquid crystal displays (LCDs) or organic light emitting diodes (OLEDs). A lens magnifies these tiny displays so viewers feel as if they're sitting in front of a large screen. Video glasses come equipped with audio equipment, often in the form of earbud headphones that hang from the headpiece. A battery pack and media player connect to the glasses through wires.

The mechanics of video glasses are designed to capitalize on an amazing function of our vision perception. Most video glasses display two images -- one for each individual eye. When aligned correctly, video glasses allow our brains to make a composite image of the two displays. This allows us to sense depth. Putting together images to form one 3-D image in our brain is known as stereopsis.

The advanced video glasses that strive for this 3-D illusion are binocular. Simpler, two-dimensional varieties are biocular. Whereas binocular glasses display two slightly different images to each eye, biocular head-mounted displays (HMDs) project one image that is seen by both eyes. Hybrids, which use a combination of binocular and biocular methods, split the video image into two parts. From these parts, your brain creates a single composite image. The more well-known video glasses on the market are hybrids.

When you want an immersive video experience, most agree that bigger is better. This is one fundamental drawback to watching video on portable players with small screens such as iPods and cell phones. Developers are working to increase the field of view (FOV) of video glasses. Our eyes have a natural horizontal FOV of about 180 degrees, but video glasses offer smaller FOVs (ranging in the 20s, usually). This is partly due to the technology used to film videos in the first place [source: Tang]. When the image contains only so many pixels, enlarging them too much will result in poor resolution [source: Cakmakei]. 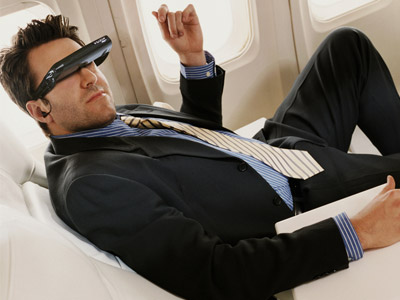 Advertisments tout that video glasses are perfect for long plane rides. This guy sure seems to be enjoying them.
Image courtesy Vuzix

Video glasses can connect to a variety of different media gadgets. Not only can many connect to video iPods and cell phones (which makes them handy travel gadgets), but some also connect to DVD players, game consoles or even video camcorders.

­If your vision isn't perfect and you need to use corrective lenses, don't despair: You can still use video glasses. Some manufacturers offer special accessory frames that your eye doctor can equip with clip-on prescription lenses [source: Myvu].

Some reviewers complain that the general experience of using video glasses isn't as fun as it sounds. Users can suffer from eye strain or even dizziness during viewing. Some call this cyber stress, and it can have a variety of causes. For instance, unless the placement of the lenses properly fits your face, your eyes will tire quickly from the hard work of focusing on the image [source: Lubell]. This is why some developers are trying to make video glasses that adjust to a user's individual interpupillary distance (the distance between the eyes). Sometimes dizziness results from the complete immersion experience. For this reason, some may prefer nonimmersive glasses. Others complain that the particular earbuds and nose bridges that come with individual headsets are uncomfortable.

Perhaps once developers get these kinks ironed out, video glasses will become more popular as personal escape measures for people to put on when they travel. Some might be skeptical and argue that video glasses are impractical novelty items. Although this might be true of movie glasses, head-mounted displays (HMDs) in general have already proven useful in practical applications.

Some dentists actually offer their patients video glasses. These dentists have found that the glasses are effective at distracting patients from the tortures of the chair. Video glasses are good stress relievers, and they don't get in the way of the dentist's work like some other personal electronic devices might. Perhaps the most useful applications of HMDs come from another use in the medical field. Surgeons can use nonimmersive HMDs when they need to watch a screen of radiographic data while performing an operation. The military has also adopted the technology for a few uses. Augmented reality achieved with immersive HMDs allows the military to train soldiers. And in the field, the military can use nonimmersive HMDs to overlay maps or other important data onto a real-world view [source: Tang].

So regardless of their success in the portable entertainment field, video glasses already have important roles in other respects.