Browse the article How the iCache Works 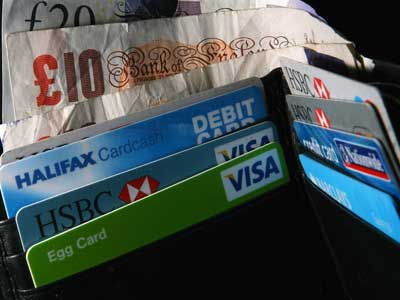 Just think -- all these cards could be consolidated onto the iCache device.
Matt Cardy/Stringer/Getty Images

The average person carries nine credit, debit and store loyalty cards [CNN Money]. That's a lot of bulk to carry around in your wallet. What if you could replace that wallet full of plastic with a single slim device that would function just like each of your cards?

That's exactly what the makers of iCache have in mind. Realizing that the technology behind the credit or debit card hasn't changed much in the last 40 years, the creators of iCache decided to update the way we conduct our everyday business transactions [CNN Money]. The iCache gadget is as thin as a Razr cell phone, and its sleek style resembles an iPod. Basically, the iCache harbors data from every credit, debit, loyalty (for example, your supermarket discount card) or gift card that you own. The gadget's design is meant to appeal to young and technologically savvy consumers as well as those seeking a safe and secure way to carry out transactions. It's the first gadget of its kind -- a digital wallet secured by the owner's fingerprint.

The iCache could not only alter day-to-day shopping, it could also change the way people travel. Instead of carrying a wallet full of credit and debit cards while you travel domestically or internationally, with the iCache travel gadget, you could streamline all your cards into one device.

­So far, the device has only been distributed by banks and other financial institutions to a select few customers. But it's a good glimpse at the potential future of making transactions. In fact, Jonathan Ramaci, CEO of the Cambridge, Mass.-based iCache, anticipates that 7 million units will be sold by the end of 2009 [CNN Money].

But how exactly can one device replace all of your credit cards? Read on to learn about the mechanics of the iCache and how to use this unique travel gadget.

Mechanics of the iCache

­The iCache's name is no accident. According to the makers, the 'i' denotes the personalization of the product -- only one unique person can use the device. The "cache" part of the title is a pun on both "cash" -- a unit of money -- and "cache" -- a collection of data stored elsewhere. But what exactly are the mechanics of the iCache? Let's take a look at how this gadget works.

Once you've got your iCache, you plug it into your computer using a USB cable. You enter your card numbers and expiration dates, which are then loaded directly onto the iCache gadget. You can enter information for almost any type of card -- gift cards, gas cards, loyalty cards for stores like supermarkets -- onto your iCache. You activate the card by placing your fingerprint on its biometric strip. You then dial through a list of cards on the LCD screen and choose the card you want to use.

So, let's say you want to use your Visa card to make a purchase. Just click Visa on the iCache screen and that information will be loaded onto a separate card -- a plastic card with a magnetic strip that then pops out of the device. The strip is temporarily loaded with data from the card you chose. You swipe the card just like you swipe any other debit or credit card and then slide it back into the iCache. The information is stored on that card for about 10 more minutes, and then the data is erased.

In addition to magnetic card strips, you also can upload barcodes to the iCache. So, if you go online and spot a coupon for one of your favorite stores, you can download the coupon onto your PC and upload it to your iCache. Once you're in the store, you can call it up on the iCache display, and the clerk can wave it over the barcode scanner.

One of the biggest selling points of the iCache is its security. The iCache is a good travel gadget for those worried their cards will be stolen on the road. What makes this card so secure? A combination of data encryption and fingerprint-activation security. The data on the iCache is encrypted through internal microchips. All information is directly loaded to the device via the USB cable -- no information is stored on your computer -- where it remains encrypted. This basically means that even though your data is backed up by the iCache server, it's broken up into parts that can only be put back together by your iCache gadget. Your data isn't sent anywhere unless you use your fingerprint for confirmation. And because the iCache uses biometric technology to read your fingerprint, you can be sure that no other person can use your card.

The iCache will only accept new cards when it's connected to your personal computer. All data loaded into the device must match the information that you provide during the gadget's initial set-up. If someone were to steal a credit card and attempt to load it into the iCache, the false card data wouldn't be recognized.

Additionally, if someone tries to tamper with the card, it can't be used; if the device is opened or the internal parts of it are tampered with, the device will be rendered useless. It will only work if it positively identifies your fingerprint. As far as security goes, the standards of the iCache far surpass those of conventional credit cards [source: XConomy: Boston].

Now that you know about the mechanics of the iCache, let's learn how to use this travel gadget. 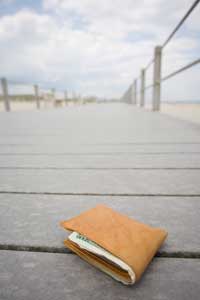 A lost wallet is much sadder than a lost iCache.
Jack Flash/Getty Images

Even though the technology of the iCache is pretty complex to ensure the security of your data, it can be used at any store equipped to read magnetic strips or barcodes.

Although the iCache is pretty easy to use, it doesn't solve all the problems with using credit and debit cards, especially if you're using it as a travel gadget. First of all, you still have to call each of the credit card companies for the cards you plan to use while you travel to let them know that you might be using them internationally or in another part of the country. So, the iCache doesn't save you that step.

If you plan to use the iCache as your one-stop money travel gadget, some more serious problems might arise. Like the adage goes, with the iCache, you're putting all your eggs in one basket. So, if you misplace it or if it gets stolen, you lose everything. In other words, you won't have that hoard of credit cards stuffed in your wallet and also in your travel packs to use as back-ups. Although no one else will be able to use your iCache without your consent, you won't have any other card resources to fall back on if you're far away from home. Then again, losing your iCache is just as bad as losing your entire wallet, except with the iCache you don't have to worry about other people using your cards. While you travel, you should carry your iCache on your person and one spare credit card elsewhere in your luggage.

Another problem you might encounter with your gadget is that store clerks may be unfamiliar with the device. If you're using it in travel, you might see this problem more often. While Visa or Mastercard symbols are internationally recognized, the iCache hasn't come close to reaching the same international popularity. A store clerk in a remote Tuscan villa might be suspicious when you dial Visa on your peculiar travel gadget. The card that pops out of your iCache won't bear the well-known blue, white and gold Visa symbol. It will instead have the lesser-known red and white iCache insignia. Also, because the iCache relies on the magnetic strip, it can't be used in places that only use the antiquated sliding credit card readers that emboss the card numbers on paper.

Another potential problem for the iCache is that the technology could become outdated quickly. As gadgets like the iPhone and Blackberry combine telephone, email, Internet connection, cameras and music, it seems logical they could begin to add credit cards to these kinds of gadgets. Perhaps the iCache will contribute to the continuing all-in-one gadget revolution.