Popularity of the Kindle 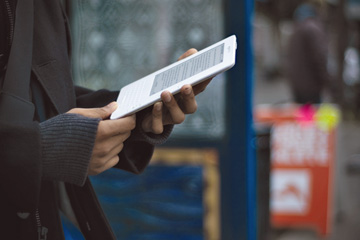 Once a rare sight on city streets, the Kindle is now a common accessory for the daily commute.
Courtesy Amazon

Upon its debut, the Amazon Kindle cost $399. While some critics said the nearly $400 price tag was too high, the demand for the Kindle soon depleted Amazon's stock of the device. Amazon's CEO Jeff Bezos offered an apology to customers. He claimed that the company sold out of its stock in less than six hours. Some Web journalists and bloggers suggested that Bezos' goal wasn't to offer a sincere apology -- it was to drive up more interest for the device [source: Sachoff].

When the Kindle became available again, the price dropped to $359. Amazon didn't release sales numbers to the general public, leaving many to question exactly how popular the device was. Netcasts such as CNET's "Buzz Out Loud" would occasionally report on Kindles listeners had spotted "in the wild." It seemed like the Kindle belonged to the realm of folklore -- you didn't own one, but a friend of a friend did.

Amazon got a huge publicity boost in October 2008. That's when Oprah Winfrey named the Kindle as her favorite gadget. Oprah devoted most of an episode of her show to promoting the Kindle. She invited Jeff Bezos to the show to talk about the device, explaining its features to her audience. Oprah also announced an electronic coupon for the device. Viewers could enter the code "OprahWinfrey" when purchasing the Kindle and receive a $50 discount.

Amazon announced in December 2009 that the Kindle was the top-selling item in the Amazon store for the holiday season. As of the third quarter of 2012, Amazon's top-sellers were the Kindle Fire, followed by the new Kindle Paperwhite and then the entry-level Kindle. For the 2012 holiday season, you can buy an ad-supported basic Kindle for $69. The Kindle Paperwhite models cost $119 for WiFi-only or $179 for 3G plus WiFi. The Kindle Keyboard 3G plus WiFi is $139. And Amazon's tablet, the Kindle Fire currently comes in two models: original Kindle Fire for $159 and Kindle Fire HD for $199. Two more models, the Kindle Fire HD 8.9 inch (22.6 centimeter) for $299 and Kindle Fire HD 8.9 inch (22.6 centimeter) 4G for $499, are expected out in late November 2012. All but the 4G are WiFi-only. Amazon also offers ad-free versions of these devices for higher prices. Shortly after release, the new Paperwhite models sold out and expected delivery times for them have grown to several weeks.

While Kindle sales have grown since Amazon launched the device, the company hasn't been free of criticism. Electronic copies of books sometimes cost about as much as physical copies, something that seems unfair to some people. Unlike a physical book, there are very few production and distribution costs associated with an electronic file.

Amazon also got into hot water when it remotely deleted copies of George Orwell's "1984" and "Animal Farm" stored on customers' Kindles. It turns out the publisher that made the books available didn't have the proper rights. Amazon credited customers the money they spent on the books and apologized for the situation. The incident brought to light a potential problem with electronic copies of books -- a gray area for consumers when it comes to owning digital information. The bad publicity didn't last long, though. In July 2010, Amazon announced that sales of electronic books surpassed hardcover sales for the first time [source: Miller]

More recently, Amazon was accused of terminating a woman's account and deleting the books from her device, stating that her account was linked to another that had abused its policies, but not providing much information and giving no recourse for resolution. While this is one isolated incident, it has prompted renewed concern about Digital Rights Management (DRM) and whether we own the content we purchase digitally [sources: Aguilar, Mosbergen].

Maybe you're a college student and you're hoping a Kindle will replace the need to lug around a pile of heavy textbooks. While a Kindle could hold an entire year's worth of college books (with room to spare), there's a problem. If the book has color illustrations or graphs, the Kindle won't be able to display them accurately. The Kindle Fire addresses this issue with its color screen, but it doesn't have the robust battery life of the E Ink models. And it's not likely that all of your books would be available in digital format.

But despite criticisms, the Kindle certainly has appeal. Amazon reported in May 2011 that e-book sales were surpassing physical book sales on its U.S. site, and reported the same of the U.K. site in August 2012 [sources: Rapaport, Strange]. With the surge in popularity of the Kindle and its competitors, the era of the electronic book seems to have arrived. Have we come to the end of the mega bookstore? And will there come a day when the idea of a physical book will be a quaint notion? Signs point to yes.

To learn more about e-books and related topics, peruse the links below.