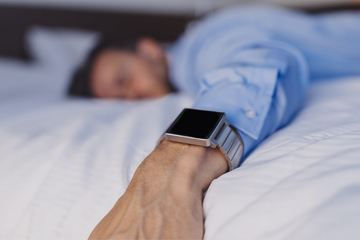 Trackers may make you more aware of your sleep patterns, but you might go crazy in the process.
Guido Mieth/Getty Images

Lights low, cup of tea in hand, Chris was settled into bed and ready to select a book from her bedside table. She'd always been a light sleeper, but the past few weeks had been particularly difficult. She shunned electronics in favor of some shuteye and deliberately developed a bedtime routine, but her nocturnal patterns were worse than ever — at least according to her sleep tracker.

Each morning, after the sleep tracker on her wrist synced with the app on her smartphone, Chris analyzed the data. The results were discouraging. Last night, for example, the data shows she'd gotten seven hours of sleep, but that only four of those were "restful sleep."

On one hand, the data overload was beginning to wear Chris down. On the other, it had raised her level of awareness about her sleep patterns to the point that she was making a concerted effort to improve them.

Wearable technologies like Chris's sleep tracker rely on a concept known as actigraphy, which measures just one variable: In this case, movement during sleep. A single sensor called an accelerometer (or fitness tracker) records the frequency, speed, and direction of your movements and then graphs that data to illustrate periods of light and deep sleep [source: Goetz].

While all this feedback on sleep patterns may prompt you to be more mindful about your bedtime routines, and perhaps encourage you to hit the hay earlier, the data itself may not be that accurate. Studies show that fitness trackers both underestimate and overestimate the amount of time a wearer sleeps — sometimes by as much as an hour or more. And if your wearable tech claims to track your sleep stages, you might want to remain a bit skeptical. Some contend the only way to truly determine sleep stages is to measure brain waves using an electroencephalography (EEG) test. Plus, fitness trackers don't yet detect sleep-related problems like sleep apnea, which is when a person briefly stops breathing while sleeping [source: Rettner].

In fact, all of this data might cause you to overanalyze your sleep patterns — to the point your once-welcome wearable tech causes you to lie awake at night. If you're agonizing over data that shows you entered a light sleep half a dozen times during the night and even awoke for a while, it's not doing your 40 winks any favors. The truth is, normal sleep stages include periods of wakefulness and lighter sleep throughout the night [source: ABC Health & Wellbeing].

In the end, the effects of wearable technology on sleep may be a wash. You'll be more aware of your sleep patterns, but you probably won't sleep any differently than before.

How can an electrode suit treat nerve disorders?
How Virtual Reality Works
How can you hear a call on a smartphone that doesn't have a speaker?