That PalmPilot Is Way Cool

by John Donovan Nov 25, 2015
Recognize any of those devices? You might even have a few stuffed away in a drawer somewhere. Wikipedia/Getty Images

Technology moves so fast in our microchip-powered, what's-next world that last month's hottest gadget is already this month's desktop clutter. That paradigm-shattering cell phone you bought last November? You're due for an upgrade!

The good thing about technology turnover is that your beloved iPod, that cartridge gaming system and even that PDA that you couldn't live without 15 years ago are all hot again.

Need proof? Consider businesses like Lekki that sell reconditioned flip phones for those who think that their bulky smartphone is just too cumbersome to be considered cool. Or that Steve Jobs is a larger-than-life character on the big screen these days. So, too, is Pac-Man. You don't get more retro than that.

Retro technology spurs enough ooohs and ahhhs and flat-out wonder that it has its own museums — mostly computer museums, like the ones here and here and here. At Georgia Tech, one of the country's leading technology and computer engineering schools, librarians are busy building a division they're calling retroTECH, where students can get their hands on old computers and computer games to see what makes, or made, them cool.

"There are two main motivations for getting into vintage technology. The first is nostalgia — the chance to revisit their first computer or the camera that their parents used on family trips," James Grahame, who runs the website Retro Thing, says in an email. "The second motivation is curiosity. If you're under the age of about 40, a record player or movie camera is a fascinating opportunity to step into an alternate technology universe where analog reigned supreme."

At Georgia Tech, the curiosity aspect leads directly to learning. More than 200 Tech students have used retroTECH in classes since August, when it opened, giving them a feel for where technology has been and how it's progressed. Center stage in the lab are several vintage working computers, including a 1994 Macintosh Performa 550.

"It's interesting when the students come in. I look at the computers and think they don't look particularly old or rare or special. They just look like what my family had when I was growing up," says Wendy Hagenmaier, a digital collections archivist at Tech. "But to the students, they look very old ... and therefore cool, which is great."

Tinkering with old computers and learning from them is important, no doubt, but the emotional and nostalgic pull that old tech has can't be discounted. Who can forget the first time you laid hands on an iPod? All of us remember our first cell phone. The first time you streamed music?

Who remembers floppy disks? Cassette tapes? And that retro yearning doesn't have to be limited to something tangible.

"Even something like considering the first email you sent. We write emails today and they don't feel as special as letters we might have written in a previous century," says Hagenmaier. "But with the passage of time, everything seems to take on this materiality — even if it is digital — and a sort of emotional substance. And we feel emotionally connected to hardware, software, even digital files. I'm seeing that more and more."

Some people are into retro tech, certainly, for the fiddling capabilities. "Never underestimate the appeal of motors, gears and complicated clockwork mechanisms," Grahame says. And, in fact, hands-on experience with tech can lead to a greater understanding of what was, what's now and what's coming up. That's the whole idea behind GT's retroTECH.

All of that's important because, as fast as things move now, it's easy to forget how things used to be.

In the end, though, retro tech is retro for a reason. It's old. If it works, it pales in comparison to today's models. And, often, it doesn't work at all. It is, in effect, obsolete.

"The trouble with vintage computers, phones and PDAs is that they don't age well. Analog phone networks were turned off years ago, so a classic Motorola brick phone simply won't work," Grahame says. "And it would probably be an incredible challenge to use a PalmPilot or Apple Newton in the 21st century."

So museums pop up with exhibits that, to many of us, look way too familiar. We sigh about the days of brick phones, boxy Apple computers and video game cartridges. DVDs are almost quaint now, giving way to streaming video. Video discs? What?

That 8-year-old kid you know? He probably has no idea what an 8-track cartridge is.

Now, some people consider it the height of yuppie coolness to buy Pac-Man consoles to put next to their 65-inch (165-centimeter) flat-screen LCD TVs. Those flip-phones are a lot easier to carry around, you know, than that massive iPhone or that unwieldy phablet. Ask any audiophile: Vinyl records sound better than CDs. They sound a lot better than MP3s.

And, yup: That old laptop sure seemed more reliable than this one.

Yes, retro is retro for a whole bunch of perfectly valid reasons. But retro, too, is cool. And it's getting cooler every day.

NOW THAT'S COOL
Georgia Tech students in Dr. Eric Rettberg's Digital Culture class are spending time in retroTECH this semester working with five classic computers and/or computer games: an Apple Power Macintosh (1995), a 1998 Dell, an iMac G3, an arcade emulator cabinet with games from the 1970s and '80s and a Performa (about 1994). Their assignment: to "think about the assumptions these computers and programs make about their users."

The Stew You Brew (and Eat) for Years: Perpetual Stew 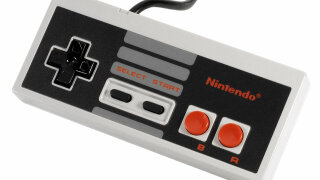