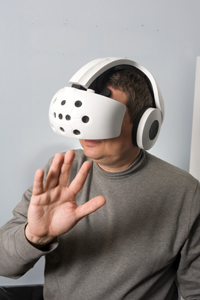 Is this guy playing a game? Or perhaps he's really getting into a 3D movie experience?
Courtesy Sensics

While virtual reality is not yet the everyday immersion we expected from the 21st century, products like SmartGoggles are certainly designed to evolve. Natalia was initially developed for a video game experience that took you a few steps further than standing in front of your TV, moving your controller to make your Wii avatar play tennis.

Primarily, that's what Sensics is touting it as: an amazing gaming platform that promises a far more engaging experience. For that reason, they're promoting the technology as a reference design, selling the blueprints to gaming developers or consumer electronics companies (like Nintendo, Google or the like) that can explore how to use it. (So the Natalia helmet model is just that -- a model designed to show companies how the technology could be used.)

And the technology is certainly not limited to gaming. "Augmented reality" glasses or goggles are a big deal right now; this is the kind Google is promoting with their Project Glass. This is a step less than immersive: Looking through your own field of vision, you see information about what you're viewing. Glance at the library, for example, and a pop-up can tell you the hours it's open. Not that you'll ever actually read a book anymore with all this 3D interactive technology around you. Who would, when you could be watching movies with your SmartGoggles on? An entirely absorbing 3D movie experience might be very appealing to cinemagoers and directors alike. No longer are you just watching Woody Allen fuss around an apartment; now you're practically feeling his anxiety next to you!

SmartGoggles (and their technology) are already being used for military and defense purposes. "Most of the uses we're seeing in the defense market and the military type applications are for training and simulation," Boger says. "So anytime you want to train a soldier, policeman or firefighter to operate a new kind of machinery or refresh his or her skills on a particular task, or just have them deal with situations that are very expensive or very dangerous to recreate in real life, that's when simulators could come in" [source: Boger].

If you're not a Navy SEAL, you could still see SmartGoggles popping up in other everyday situations. Consider the 15-year-old with a learner's permit: While you might want them to know how a car reacts to icy streets, you probably wouldn't send them out in the dead of winter to test their limited knowledge. SmartGoggles could provide a much more immersive, safer simulation.